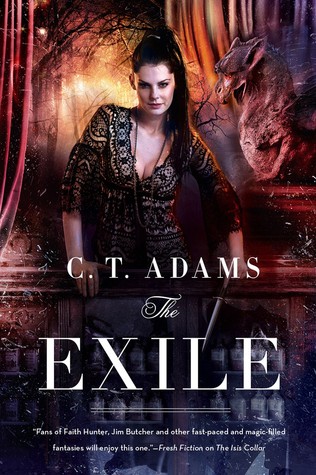 Brianna Hai runs an occult shop that sells useless trinkets to tourists—and real magic supplies to witches and warlocks. The magical painting that hangs in Brianna’s apartment is the last portal between the fae and human worlds.

A shocking magical assault on her home reveals to Brianna that her father, High King Liu of the Fae, is under attack. With the help of her gargoyle, Pug, her friend David, and Angelo, a police detective who doesn’t believe in magic, Brianna recovers what was stolen from her and becomes an unwilling potential heir to the throne.

A suspenseful urban fantasy with a hint of romance, The Exile is the first solo novel by C. T. Adams, who is half of USA Today bestselling author Cat Adams. Like the Cat Adams Blood Singer novels, The Exile is set in a world where magic is real and contains Adams’s trademark blend of suspense, action, humor, and strongly emotional writing.

It took me two tries to get into this novel. The first time I gave up (I wasn’t in the mood). The second time it worked. What I realized was, the start is pretty rough, but once you get past that, things are pretty smooth sailing.

I tend to struggle with most urban fantasy, which is no secret to anyone who has read this website. It tends to either work for me or not. There really isn’t that much middle ground. However, sometimes I get a book that captivates me enough to pull me through the rough parts, and this was one of those.

As I mentioned, the start of the book was the part where I struggled most. There are some incredibly awkward phrases, some really time-tested similes, and some incredibly jarring, weirdly detailed descriptions involving cars. Furthermore, there are a ton of different perspectives to get used to, at times too many for a novel of this size. All of that combines to make the first part of this novel hard to get used to. It’s jarring, and the pacing is off due to all of the things I just mentioned.

However, it doesn’t really take Adams long to sort all of this out and find her stride. While I never really got over feeling that there are just too many perspectives for a novel this length, it quickly became obvious that the book itself is incredibly layered and detailed for something this length. It’s short, and short books are usually pretty surface level, but this one really delves below the surface. Soon, very soon, readers will start to see that we aren’t just reading any urban fantasy book. Brianna is a pretty layered character, and while the secondary characters vary in levels of interesting and believability, none of them are surface level, and it makes all the difference.

The world has a lot of detail, though I never quite grasped the magic system, and sometimes the conflicts that took place were a bit messy and lacked some logic. However, for a portal fantasy, a novel that takes place both here and elsewhere, the foundation that Adams has laid for her readers is solid and she’s given herself a lot of fertile ground to build on in future installments of the series.

The plot moves pretty quickly once readers are past the lumps and issues in the first part of the book. Furthermore, the complex world, and complex characters makes the situations that readers will learn about even more interesting and believable. It’s hard not to get sucked into things, and these complexities work to make it hard for readers to pinpoint any one Big Bad Character and the Angelic Character. There really isn’t any solid good and evil, it’s just a bunch of people thrust into confusing situations, and you’re left to figure out what side of what gameboard they are all playing on.

There are a lot of surprises, not the least of which is the ending. And yes, this novel did have its fair share of problems, but it was also incredibly strong in so many ways that it balanced pretty well. This is definitely the start to a series. There is a lot of room for Adams to grow and develop, and is sure to move in interesting, unexpected ways as it progresses.

The Exile both underwhelmed and overwhelmed me, but what it left me with is a fond impression of strong, visionary writing and a series that is one I will anxiously anticipate. It is worth giving it a try. It will probably surprise you.