“Why are we fighting this war? Because evil must be resisted, and sooner or later there comes a time when men of principle have to make a stand. Because war is good for business and it’s better to die on our feet than live on our knees. Because they started it. But at this stage in the proceedings,” he added, with a slightly lop-sided grin, “mostly from force of habit.”

A soldier with a gift for archery. A woman who kills without care. Two brothers, both unbeatable generals, now fighting for opposing armies. No-one in the vast and once glorious United Empire remains untouched by the rift between East and West, and the war has been fought for as long as anyone can remember. Some still survive who know how it was started, but no-one knows how it will end.

This serial novel from the World Fantasy Award winning K. J. Parker is the story of a war on a grand scale, told through the eyes of its soldiers, politicians, victims and heroes. The first three parts of The Two of Swordswill arrive in April 2015, with further installments to be released monthly.

I’m a huge K.J. Parker fan. HUGE. Parker is one of my top three favorite authors. And now that I know that K.J. Parker is also Tom Hold, I can actually use the correct pronoun when I write a review. 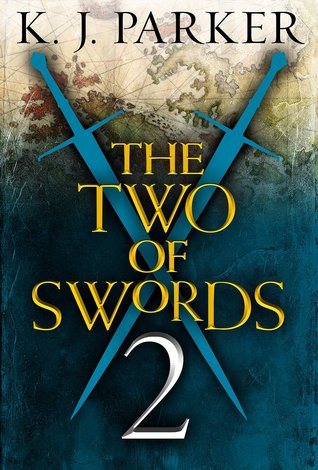 I’ve been aching for a new Parker novel, so I jumped on The Two of Swords when Orbit sent me an email about it. I devoured the first three portions, uncertain of what to expect. I’ve never read a serialized novel before. I didn’t know what to expect.

Basically, each part of this serialized work is a (long) chapter. Each chapter/section focuses on a different character, usually one that you were introduced to in the previous section. I haven’t read past the third part (yet), so I’m not sure if it will rotate back through characters that we’ve already read about or what. Regardless, Parker kept things related and easy to follow through with, with minimal confusion (if any at all).

The first part focuses on Teucer, and this is the part that I seemed to struggle with the most. Readers are introduced to the culture, and the war. Teucer is a character that means well, and finds himself in a bad situation. He trusts easily, and almost seems unbelievably naive and rather clueless. This part of the story is entertaining, but there wasn’t really much here that held my interest. There was a distinct lack of Parker-esque magic, and things kind of moved along at a ho-hum pace. It felt more like an introduction than an actual chapter/section, and it felt a little longer than it needed to be.

The second part focuses on Musen, Teucer’s companion. He’s a bit more veiled, a bit more mysterious and held my interest quite a bit more than Teucer did. The world starts gaining some complexity and detail, and those little Parker nuances, all the reasons I love the author so much, start creeping in. This second section makes the plots-within-plots start to appear. Things aren’t what they seem. Morality is gray and fluctuating, and characters often find themselves in situations and spots they didn’t previously expect to find themselves in. This, by no means, is the strongest I’ve seen Parker write yet, but things in section two are picking up. This is where my attention really was grabbed and where I really decided that this was a book I wanted to continue reading. 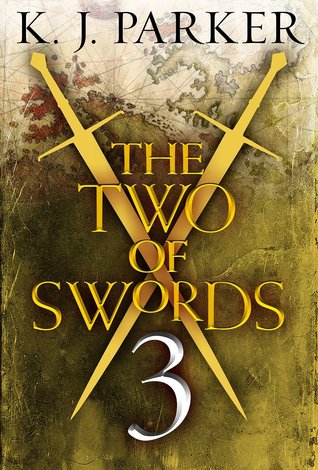 The third section is my favorite. This is where Parker really shines. He pulls out all the stops, cracks his knuckles, and decides to stop messing around. While it’s obvious that Parker is expanding the world and viewpoints in each section, so far it’s Telamon’s portion that really shines. Telamon is a thief/assassin/secret agent who kind of unexpectedly drops into the story in the previous section and really earns the spotlight here. This is where Parker shows how cunningly he can weave together plots and side plots, without losing any of that subtle complexity that I love him for. His wit and cunning really shines through, and Telamon became an instant, memorable hit.

While the third section, so far, has been my favorite, I look back and I now realize that it’s a sort of slow burn start to the novel. The first chapter is slow, rather unimpressive, but still impressive enough to keep me going, despite how much Teucer frustrated me. Section two picked it up a bit. It’s still a little frustrating, but the characters are becoming less one-dimensional, and the world and conflict is starting to gain enough layers to keep me wondering what exactly is going on. The third section is where Parker shines. It contains everything I love about Parker’s style, and almost nothing that didn’t impress me. The characters are complex and witty, the world is dark and full of mystery and layers. Things are happening that I don’t understand, and I don’t mind that a bit.

In fact, that’s what I love about Parker. Somehow he always manages to make me read his books, and generally not have a clue about the bigger picture the whole time. I don’t mind a bit because the small parts that make the big picture so big and impressive are just so damn flawless. Furthermore, I tend to think that Parker’s writing is strongest when it is focused on small parts rather than a long novel. Don’t get me wrong, I love his novels (that’s why he’s one of my favorite authors), but reading his work in small chunks like this really makes me appreciate all the subtlety and nuance that he can pile into his writing, which I tend to overlook when I’m blowing through a novel length work.

Parker is a master of detail, and while this had a rather slow start, it was so worth pulling through. I cannot wait to read more.