Guest Post | T. Frohock on Contempt Prior to Investigation

Bio: T. Frohock has turned a love of dark fantasy and horror into tales of deliciously creepy fiction. She lives in North Carolina where she has long been accused of telling stories, which is a southern colloquialism for lying.

T. is the author of Miserere: An Autumn Tale and her newest series is Los Nefilim. The first novella, In Midnight’s Silence, is available now. The second novella, Without Light or Guide, will be released in November 2015.

Contempt Prior to Investigation
by Teresa Frohock

Recently, I saw a tweet in which an individual professed s/he would never read a novel that used the word “mankind” in the blurb. Since the tagline of my Los Nefilim series has the word “mankind” in it (not once, but twice, mind you), the comment sort of drew me up short. I knew the tweeter, and the prejudice made me kind of sad, because I thought the individual might have enjoyed Diago and Miquel’s story.

Personally, I loved the tagline, which was written by my publisher, not by me. I thought it evoked the old radio shows from the 1930s and 1940s, which all utilized taglines to identify specific shows.

I even looked up the word “mankind” to see what all the umbrage was about, but “mankind” is simply defined as: “Human beings collectively, the human race.” That’s from the Oxford dictionary; most other dictionaries concurred with the definition.

I’m not disputing “mankind” is an outdated term. I would definitely use “humankind” if writing a paper or an essay, or even a blog post such as the one I’m writing now; however, In Midnight’s Silence—and the whole Los Nefilim series for that matter—is fiction, which is set in the 1930s. The word, “humankind,” might have been in use in the thirties, but it was hardly common. 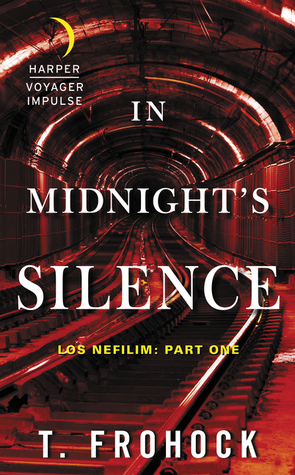 Then there are marketing considerations to take into account. While “humankind” is most certainly proper to modern sensibilities, it’s also a cumbersome word. I mean, let’s face it, from a marketing prospective: The fate of humankind has nothing to do with humankind possesses all visceral pop of wet clay.

Marketing attempts to achieve is a feel for the story and the time period in which the story is set. If I think I’m reamed in tight with novella word counts, marketing has it twice as tough in their attempt to capture the atmosphere of a twenty-eight thousand word story with only a sentence.

Of course, my justifications for the word “mankind” doesn’t mean I don’t understand what the tweeter meant by the comment. This person wants more stories with female protagonists, and there’s certainly nothing wrong with that.

I didn’t make Diago and Miquel female characters, because they’ve never been female to me. When I first conceived Diago’s character, I knew only two things about him: he was male and gay. I wanted very badly to tell his story and be true to the hardships he overcame in his life.

I considered adding more females as major characters to the story, but when I do that, the focus of the story begins to shift away from Diago and Miquel’s relationship. Since these are novellas, and not novels, I’m up against the word count, so I have to keep the story as lean as possible. That means I have to actively choose which aspects of characterization I want to zoom my lens onto. In the case of Los Nefilim, it is Diago and Miquel.

Unfortunately, I have to be just as dedicated as the tweeter, because it’s my story. I must be true to both my characters and the time period. There is nothing wrong with the tweeter wanting more stories with female protagonists; likewise, I am just as free to make the best determination for my characters and stories. If Los Nefilim doesn’t have the type of characters or plot you enjoy reading, then please don’t waste your time.

All I ask is that you don’t make a determination about any author’s work based on one word in a tagline or a blurb. It’s a rather shallow way in which to evaluate any novel, and that kind of attitude can also set a reader into an echo chamber of sorts—one where the only opinions heard are agreeable ones, and that’s not good for anyone.

Besides, contempt prior to investigation might cheat a reader out of a great story—one which they might otherwise love.