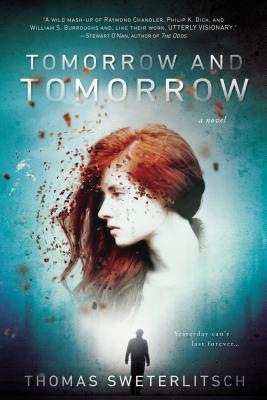 “A wild mash-up of Raymond Chandler, Philip K. Dick, and William S. Burroughs” (Stewart O’Nan, author of The Odds), the near-future thriller Tomorrow and Tomorrow is an insightful exploration of humanity’s relationship with evolving virtual environments and an accurate portrayal of how the technology that was developed to connect people inevitably isolates them…

Pittsburgh is John Dominic Blaxton’s home even though the city has been uninhabitable ruin and ash for the past decade. The Pittsburgh Dominic lives in is the Archive, an immersive virtual reconstruction of the city’s buildings, parks, and landmarks, as well as the people who once lived there. Including Dominic’s wife and unborn child.

When he’s not reliving every recorded moment with his wife in an endless cycle of desperation and despair, Dominic investigates mysterious deaths preserved in the Archive before Pittsburgh’s destruction. His latest cold case is the apparent murder of a woman whose every appearance is deliberately being deleted from the Archive.

Obsessed with uncovering this woman’s identity and what happened to her, Dominic follows a trail from the virtual world into reality. But finding the truth buried deep within an illusion means risking his sanity and his very existence…

384 pages (paperback)
Published on May 5, 2015
Published by Berkley
Author’s webpage
Buy the book

I really like near future science fiction. It can be terrifying, and almost always thought provoking. The unique vision that authors have of what could happen to our world captivates me. Tomorrow and Tomorrow is a believable, terrifying spin of what the world could be. The strength of it is how plausible it is. It isn’t hard to believe that much of what the author writes about could actually, in some way, become reality in our own world.

Tomorrow and Tomorrow is a dark, rather uncomfortable (in a good way) near future science fiction that centers on a noir feeling mystery. The world, as I mentioned above, is dark and gritty and uncomfortably plausible. The mystery is incredibly well done. It takes time to see how all the threads fit together, and occasionally the book can be a little hard to follow, but it all pans out in surprising ways with plenty of twists and turns to keep readers guessing.

The main character, John Dominic Blaxton, is a broken man who is barely surviving after the tragic death of his wife and child in the bomb that decimated Pittsburgh. After a bad run in with the drug Brown Sugar, Blaxton loses everything and is forced into rehabilitation and therapy. Quickly he finds his investigation services borrowed to help someone find what happened to his daughter, who is being systematically deleted from the archive. His investigation of Albion (the daughter) takes him to surprising places, and he learns some shocking things as the investigation of Albion circles back to the investigation of another unsolved mystery involving a woman named Hannah.

Tomorrow and Tomorrow is a lot of different things – noir, dystopian, mystery and science fiction. It really blends the genres well and is pretty addicting from the start. Blaxton is a fascinating character, because he’s so damaged from the loss of his wife and child. It hangs over him constantly, and his depression and angst is a very real thing. He offers readers an interesting window into this technologically pumped world, a rather gripping vision of just how focused everything is on virtual reality, big brother is always watching, and all that. There are quite a few uncomfortable scenes, as public executions are described, the President of the United States is more of a showgirl than anything else, and there are popular channels where murdered individuals are rated based on their fuckability.

Plenty of messages are subtle, but there are also quite a few which are fairly obvious and could be seen to hit readers over the head. However, the commentary is important, and like I’ve said, it is absolutely gripping in a sort of terrifying way. It’s interesting to see how technology has altered society, and it’s easy to see some of the roots of the situations in the book in our own world here.

The mystery is well done and planned out in such a way that will keep you guessing, though it’s hard for me to say what is more interesting, the plight of our protagonist, or the solving of the mystery itself. The ending isn’t really nicely tied up and packaged for readers, but it’s important to know that not everything in life is nicely boxed and packaged, and some endings are more question marks than periods. That being said, it is hard for me to picture a different sort of ending for a novel like this. It isn’t neat and clean, but neither is the book, and in that respect it stayed true to the feel of the novel as a whole.

Tomorrow and Tomorrow surprised me. It is completely unique, with a style of writing that makes everything feel immediate and incredibly important. It is powerful, and frightening, and will keep you guessing to the very end. That’s part of the magic of it. It’s a book that can’t really be neatly summed up or defined, but you won’t forget it. I am anxious to read more by this author.