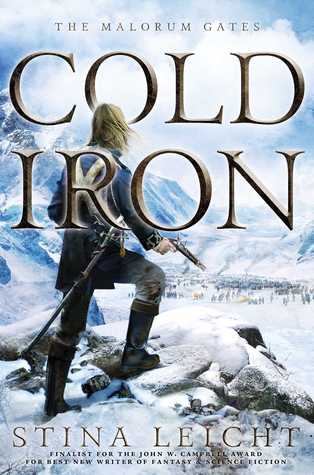 Fraternal twins Nels and Suvi move beyond their royal heritage and into military and magical dominion in this flintlock epic fantasy debut from a two-time Campbell Award finalist.

Prince Nels is the scholarly runt of the ancient Kainen royal family of Eledore, disregarded as flawed by the king and many others. Only Suvi, his fraternal twin sister, supports him. When Nels is ambushed by an Acrasian scouting party, he does the forbidden for a member of the ruling family: He picks up a fallen sword and defends himself.

Disowned and dismissed to the military, Nels establishes himself as a leader as Eledore begins to shatter under the attack of the Acrasians, who the Kainen had previously dismissed as barbarians. But Nels knows differently, and with the aid of Suvi, who has allied with pirates, he mounts a military offensive with sword, canon, and what little magic is left in the world.

There are quite a few underrated authors out there. These are authors with a disgusting amount of talent, but not nearly the attention for said talent that they deserve. Stina Leicht, in my humble opinion, is at the top of that list. I fell in love with her writerly abilities with her duology The Fey and the Fallen. When I heard she was writing an epic fantasy in a secondary world, I knew I had to check it out.

Cold Iron is, as I mentioned, set in a secondary world, and it is epic in just about ever sense of the word. There are queens and kings, princes and princesses, and a ton of political intrigue to keep those who like that sort of thing happy. The book starts out with a younger prince. Nels is a teenager on the cusp of adulthood. He gets himself into a situation, makes a few youthful mistakes that end up impacting the rest of his life, and his twin sister’s life as well. These mistakes lay the foundations for the roles each twin will play in their lives.

I have to admire Leicht for using such a huge error of judgment on Nels part as the foundation for just about everything that comes later. It’s nice to see that princes and princesses can make very human mistakes, and live out the results of those mistakes with poise and grace, if not a bit of very believable challenge.

The king and queen play influential roles without ever really stepping into the limelight in this book. The real focus is on Nels and his twin sister Suvi, both of whom are out in the real world. This is a great way for readers to get real and gritty insight into the growing conflict, as well as some great insight into the cultural details that impact the book so dramatically. Furthermore, despite the fact that Nels and Suvi are both royalty, they are also very human in face of their grand titles. It’s easy to forget that this is a prince and princess, and just enjoy their stories because they are so very, very human.

In some ways Leicht does subvert typical character roles. Suvi is more comfortable on a ship, taking action, than griping about what is going on in the greater world while she lives safely behind palace walls. She wears pants, and battles beside whoever needs her and isn’t afraid to work hard. Nels is a man who seems more comfortable among the lowly soldier than in a palace. He lives a humble life, so humble in fact that it is easy to forget that he born into nobility. It’s rather refreshing to see such high status protagonists stripped of just about everything that makes them high class. They are shockingly human, and beautifully flawed.

I will admit that the book started out a little rough around the edges, but it quickly evens out. Perhaps my biggest complaint was that some of the world building never quite fleshed themselves out completely. I really hesitate to go into more detail than that because it could give away important plot issues. For example, the fixation on death is very, very important, but I never really understood why it was such a fixation or how exactly it determined social roles (at times). I don’t really know if that makes sense. You’ll probably have to read the book to see what I mean.

A lot happens in Cold Iron. This is, in a very real sense, a book that explores everything that leads up to That Big Event. It’s an eloquent, and detailed introduction for everything that will probably happen later in the series. This book is a slow burn, but it is delightfully addicting and incredibly readable. Everything winds together intricately to create a memorable end that will leave readers hanging on for the next book in the series.

This is a rather thoughtful epic fantasy, and I’d really expect nothing less from Leicht. She takes common themes like destiny and fate, the role of the chosen one, and violence itself and toys with them in such a way that readers won’t help but question them, and think about these themes. Each character has their strengths and their weaknesses, but perhaps the real strength of the book as a whole is the fact that this epic fantasy is so incredibly human in just about every respect. In a genre where so many books are more incredible, more fantastic, more magical, Leicht has somehow managed to take all that makes epic fantasy so damn addictive, and turn it into a believable human saga that is not only immensely readable, but completely memorable.

Is Cold Iron perfect? No, but perfection is boring. It is, however, thoughtful as it subtly examines some common epic fantasy themes, and leads readers to a wham-bam ending that will leave them yearning for more. Leicht is an incredibly talented author. Her books are always such a delight.