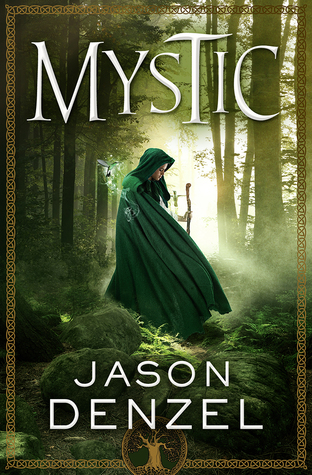 I called to the Myst, and it sent us you.

For hundreds of years, high-born nobles have competed for the chance to learn of the Myst.

Powerful, revered, and often reclusive, Mystics have the unique ability to summon and manipulate the Myst: the underlying energy that lives at the heart of the universe. Once in a very great while, they take an apprentice, always from the most privileged sects of society.

Such has always been the tradition—until a new High Mystic takes her seat and chooses Pomella AnDone, a restless, low-born teenager, as a candidate.

Commoners have never been welcomed among the select few given the opportunity to rise beyond even the highest nobility. So when Pomella chooses to accept the summons and journey to Kelt Apar, she knows that she will have more to contend with than the competition for the apprenticeship.

Breaking both law and tradition, Pomella undergoes three trials against the other candidates to prove her worthiness. As the trials unfold, Pomella navigates a deadly world of intolerance and betrayal, unaware that ruthless conspirators intend to make her suffer for having the audacity to seek to unravel the secrets of the Myst.

Alright folks, to be quite honest with you, I almost didn’t read this book. I got through about three pages, and I was 90% sure I would put it down. However, I pulled through, and in the end I’m glad I did. This book enchanted me, and once I got used to that thing that bothered me at first (which I will expand on a bit), it was really easy to ignore because there was so much else for me to enjoy.

So what bothered me so much at the start? Honestly, it was something that hasn’t really ever bothered me this much before. In fact, the simple fact that this aspect of the book stuck in my craw caught me so off guard because, really, naming conventions usually don’t even phase me. They are a nonissue. I just, usually, don’t care. However, for whatever reason I did care with this one. The words that bugged me are quite simple, but instead of “father” it’s “fathir” and instead of “grandmother” it’s “grandmhathir.” And looking at them now, they are simple words, but man, they crawled under my skin. And I’m mentioning that because I do know that some people are big on naming conventions, and thus, should be prepared to expect this.

Honestly, that’s the biggest gripe I have with this book. There is a lot here that is quite enchanting. Myst is one of those books that can span generations. It’s a heartwarming coming-of-age tale about a young woman who is finding her place in a very large world. It’s a fish out of water tale, and it’s quite well done. Pomella’s story is told in such a way that I can easily picture teenagers enjoying it, as well as adults. It’s not really a challenging story. You’ll probably be able to predict most of it, but that’s not really a bad thing. Sometimes it’s nice to just curl up with a book and enjoy the story. Knowing where it’s going just allows you more time to enjoy where you’re at.

One of the best aspects of this novel was the world building, which was steeped in nature and, due to Pomella’s singing ability, song. Denzel does a fantastic job at weaving together nature and music and creating something that is truly his own. However, there are a lot of little flourishes that I also enjoyed, a lot of mythology that reminded me of stories I’ve heard before, and books I’ve read. While it may be reminiscent, it’s not a copy. This definitely is Denzel’s very own animal, but in some ways it felt kind of like he was paying homage to some of his inspiration, and I really enjoyed that aspect of it quite a bit. Furthermore, so much of the magical force in this world is known, but not understood, so it’s a lot of fun to ride along with Pomella as she learns and really starts to explore the magical elements of her world.

Pomella herself is a character you’ll either love or hate. She is absolutely genuine. If she was a D&D character, she’d be aligned with lawful good. And, like I said, you’re either a person who thinks that’s interesting, or you’re not. Pomella, however, was a lot of fun to read about, mostly because so much of her story was discovering who she really was in the face of all these interesting things that are happening. When you put her in her world that is so very magical, you have quite an enchanting formula.

While this book might seem pretty self explanatory on the surface, there is a lot that happens that is quite impressively thought provoking. Not only is Pomella navigating these interesting trials and learning about the myst that is such a driving force in her world, she’s also exploring deep and very well explored themes regarding social class, responsibility and so much more. It’s aspects like this that make me really look at this book as something more than young adult. It will appeal to quite a wide range of readers, mostly because Denzel has an art with breaking down important topics, and making them digestible to a wide range of readers.

There were quite a few surprising twists and turns, and while I did feel like most of this book was predictable (Again, that’s not a bad thing.) the ending really wowed me. Denzel neatly explored the world he created in this novel, but he left room for more depth and details in future books, and I’d honestly love to read them.

I’ve been having a hell of a year. I’ve had a baby, and now I’m facing cancer tests, and life has been hard. These things cause stress, and the lack of sleep thrown into it all just fuels that fire. I’ve been wanting comfort reads. I’ve been wanting books I can turn to that will help me relax, detach, and just enjoy. It’s rare that I come across a book that feels like the comfort blanket I’ve been looking for, but Mystic certainly is one of those. It’s fun, surprising, and thoughtful. The best word I could use to describe this book is enchanting. Mystic is enchanting. It is the literary equivalent of a warm hug, and I read it right when I needed one.