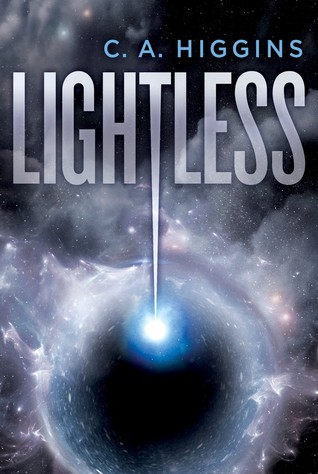 The deeply moving human drama of Gravity meets the nail-biting suspense of Alien in this riveting science fiction debut. With bold speculation informed by a degree in astrophysics, C. A. Higgins spins an unforgettable “locked spaceship” mystery guaranteed to catapult readers beyond their expectations—and into brilliantly thrilling new territory.

Serving aboard the Ananke, an experimental military spacecraft launched by the ruthless organization that rules Earth and its solar system, computer scientist Althea has established an intense emotional bond—not with any of her crewmates, but with the ship’s electronic systems, which speak more deeply to her analytical mind than human feelings do. But when a pair of fugitive terrorists gain access to the Ananke, Althea must draw upon her heart and soul for the strength to defend her beloved ship.

While one of the saboteurs remains at large somewhere on board, his captured partner—the enigmatic Ivan—may prove to be more dangerous. The perversely fascinating criminal whose silver tongue is his most effective weapon has long evaded the authorities’ most relentless surveillance—and kept the truth about his methods and motives well hidden.

As the ship’s systems begin to malfunction and the claustrophobic atmosphere is increasingly poisoned by distrust and suspicion, it falls to Althea to penetrate the prisoner’s layers of intrigue and deception before all is lost. But when the true nature of Ivan’s mission is exposed, it will change Althea forever—if it doesn’t kill her first.

I devoured Lightless, and there are a few reasons for that. First, it’s unlike most other SciFi books I’ve read. Secondly, the characters and their interactions are likewise unique. Due to that, I think this book will be (and has been) a hit or miss with readers.

Lightless takes place on a spaceship traveling to Pluto with a total of three people on it. The book never leaves that ship, and I think the most players you’ll ever see on the ship at once is six. It has a very limited setting, and a very limited cast. That’s pretty unusual for a deep space SciFi book. If you go into this expecting a James S.A. Corey style space opera, you’ll be disappointed.

The limited setting and cast allows Higgins to really focus on certain aspects of her novel. The plot, for example, and its many minute intricacies. Relationships are also an important focus for Higgins, and they often end up changing and evolving into something far different than I first expected. This novel never really moves toward intimate. The character interactions are always professional. This is a book about a bunch of people doing their jobs, and that might come across as stilted to some readers, but it’s actually pretty interesting as Higgins slowly picks away at the strict boundaries between professional and personal, and blurs those lines so subtly you barely realize it is happening. In many ways, this is a personal drama, and it plays out far differently than most personal dramas play out, and I completely ate it up.

I enjoy books where the setting sort of becomes a character in its own right. An example would be America Elsewhere by Robert Jackson Bennett, the city is so vibrant and well realized that it almost felt as alive as the people who lived in it. Higgins takes that love of mine for a setting that is almost “alive”, and really elevates it to a new, thought provoking level. She explores a new sort of relationship, and artificial intelligence in a way that I’ve never really read before. It was absolutely fascinating. She also managed to keep me wondering what exactly was happening until almost the end, when it was actually happening.

Most of the book is an investigation and questioning. A lot of what is taking place in the wider universe is shown to readers in bits and pieces throughout this questioning, and slowly a picture of the geopolitical (I don’t think that’s the right word for this) climate unfolds. It’s layered and detailed and full of tension. The heist at the start of the book is far more intricate than I first expected, and slowly, deftly, Higgins ramps up the tension throughout her novel until its almost at the breaking point. Toward the last third of the book, I couldn’t put it down if you’d paid me money to do so.

The best part of this novel is how detailed, and subtle it is. The setting and cast is so incredibly limited, really creating a unique setting unlike anything I’ve read before. In some ways it felt larger than life because it was so incredibly well realized. The relationships and personal evolutions are just as subtle and shocking as everything else, and end up being quite surprising. The slow revelations, and the teasing out of information through questioning sessions was incredibly well done. However, where Higgins really excels is under the surface. While all of this is taking place, she’s slowly ramping up the tension, revealing small details and tidbits for her readers, laying out a puzzle that will be pieced together in a dynamic ending that will leave you reeling.

This book won’t be for everyone, but it absolutely blew me away.