Ah, the time of year for lists….

This year was my year of audiobooks. I listened to roughly 50 audiobooks in 2015. I’ve learned this is a fantastic way for me to keep myself sane at work. I get about half of what I have listened to through Audible, and the other half through Overdraft, and my local library. Overdraft keeps things interesting. Their selection isn’t huge, but they are always getting different books so I tend to take a chance on books that I don’t typically want to use an Audible credit on. Some have surprised me in a good way, some in bad ways.

For audiobooks, it’s all about the narrator. I’ve learned a few things:

With my Best Books of 2015 list, I put only books published in 2015 on it. With audiobooks it’s going to be books published in any year that I listened to in 2015. I haven’t had enough authors or publishers ask me to review their 2015 published audiobooks to make an actual list out of them. This list is in no particular order.

As always, I’m looking for suggested and recommended listening. What would you recommend? 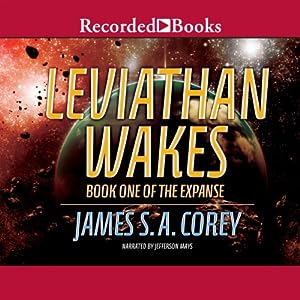 This series is fantastic, action SciFi with some really interesting concepts in a vast and sprawling universe with tons of social, cultural, and governmental issues. Each book in this series (that I’ve listened to so far) expands upon the last. Jefferson Mays does a great job at focusing on telling a good story. He has a great cadence, and is incredibly easy to listen to. It’s easy to focus on the story the way Mays tells it, which is important when so much is happening. 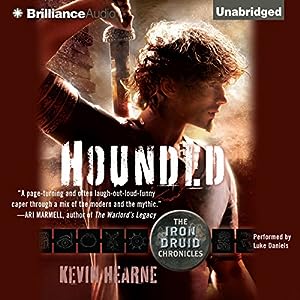 Honestly, this one caught me off guard. The books are an absolute riot, but I was told by a few people that they’d probably bounce off of me for various reasons. I put off reading them, but the first two books were part of Audible’s Black Friday sale, so I jumped on them. I started listening to them at work, not really expecting much and I ended up being so absorbed in them I’d get pissed when I had to pause the book to do other things. Daniels does a great job at nailing the voice for both Atticus and Oberon. Oberon is does especially well. The books themselves really breath new life into urban fantasy, but Daniels does a fantastic job at making these books even more enjoyable. In fact, this is one of those audiobook experiences that has made it absolutely impossible for me to read or enjoy these books in any other medium. 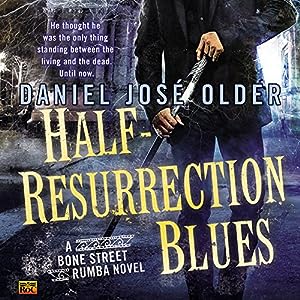 This is the first time I’ve listened to an audiobook narrated by the author. It was a lot of fun. There’s something nice about listening to a book that is read the way the author means it to be read. This book is a lot of fun, and quite an interesting twist on urban fantasy anyway, but Older’s fantastic narration really pumps it up a notch. He has a way with bringing people and places to life, and ramping up the tension with his voice. Speaking of his voice, it’s deep and rich and easy to listen to. In fact, I could probably listen to him read me my grocery list. The book is fantastic, and hearing an author read what he wrote himself is memorable. 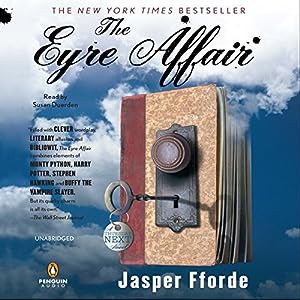 This book rocked my world so hard. Not only is the book itself incredible, hilarious, action packed and absolutely riveting, but the narration nails it perfectly, from the tone to the dry humor and all the nuances of the plot. Usually I only listen to audiobooks at work, but this is one where I was finding stuff to do around the house so I could keep listening. I had no idea that Fforde was this much fun, and I’m pretty sure everyone at work thought I was insane due to my spontaneous bursts of laughter about nothing they could hear. Susan Duerden managed to tell a fantastic story, and absolutely nail the dry wit found throughout the book. It’s easy to love an audiobook when the book itself is this damn incredible. 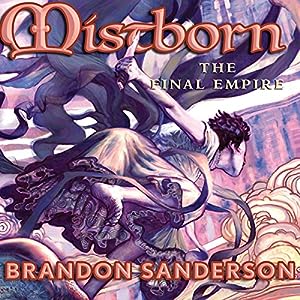 This is not the first book I’ve listened to Kramer narrate, and he is probably one of my favorite narrators because he has the ability to absolutely absorb me in the story being told. This is another one of those books that, thanks to Kramer, I just can’t read anymore. I have to listen to it. I tried to read the second book in the series, and I did it, and liked it, but I want to actually listen to it now. I think listening to Kramer read this book to me would scratch the itch I have now. The thing is, Kramer just tells a damn good story. He focuses on the story, giving each character just enough inflection for me to know who is speaking, but not enough to distract me. He balances a really fun, interesting plot with a likewise fun and interesting voice. The whole thing balanced perfectly and he completely ruined me. Now it’s impossible for me to read these books. I have to listen to Michael Kramer read them to me. There is no other way for me to enjoy them. 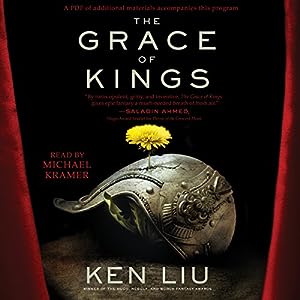 The Grace of Kings – Ken Liu
Narrated by Michael Kramer

MICHAEL FREAKING KRAMER, YOU ARE RUINING READING FOR ME. I’m actually really glad that I listened to this book rather than reading it, which kind of surprised me. I never really expected to say that about a book. However, this one is one of the rare ones when listening to it allowed me to really focus on the story rather than paying attention to the names and trying to imagine how they’d really sound if I had a clue. The Grace of Kings was one of my favorite books this year, and for numerous good reasons. I’m absolutely dying to get my hands on the next incredible thing Liu churns out, but listening to this book was probably one of the best literary decisions I’ve made this year. I spent absolutely zero time trying to figure out how all the names should sound (which is something I spend a ridiculous amount of time on when I read), and I spent all my time just enjoying Kramer hypnotize me with his incredible storytelling and this absolutely phenomenal book. Because, damn folks. If you haven’t read (or listened to) this book yet, what is wrong with you?! 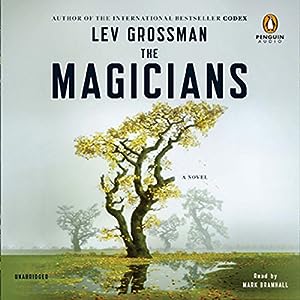 When I first read this book, I was sort of impressed and unimpressed by it at the same time. I discovered that what I really needed was to listen to this book. I actually listened to the entire series this year in quick order, and I was absolutely in love with it. Bramhall does a great job reading this one, bringing the dry humor and the internal conflicts to life for his listeners. It’s easier to sympathize with the characters and the situations, and overlook the things that probably would have really bothered me if I was reading and actually focused on the words and thinking intently about them rather than just sitting back and enjoying someone with an incredible voice telling me an absolutely addictive story. This series isn’t perfect, but it might as well be with Bramhall reading it to me. 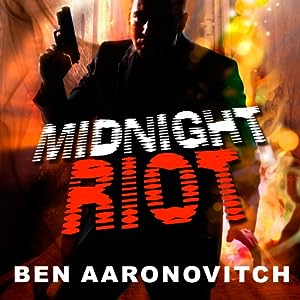 This is one of those random books I picked up on Overdrive, and I honestly wondered why in the hell I didn’t read/listen to it sooner. Holdbrook-Smith absolutely nails his performance in this series. He is really intense, with a thick-ish English accent that brings the whole thing to life. In fact, the intensity of him surprised me, but it served to really ramp up the tension throughout the book. I was surprised that there were plenty of parts where I could hear him taking a deep breath, or pausing to lick his lips. These small details at just the right moments brought the whole story, the chases, the conflict and confusion, the worry and everything else, to vibrant life to me. Parts of these books are white-knuckle, and the way Holdbrook-Smith told this story actually had me white-knuckle gripping things. I wasn’t listening to a story, I was living someone else’s high octane life in a London I could almost smell, and it was glorious. 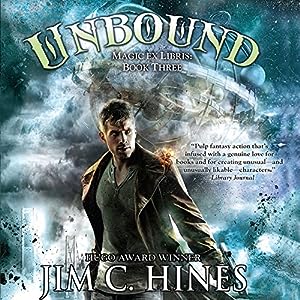 I’m a huge, huge fan of this series, and I am so very sad that Hines is ending it with this book coming out. This series is a whole lot of fun. This one is no different than the last in the fact that it is full of nonstop action and tons of interesting magic that tugs at my book loving heart. Isaac travels far and wide, and while a lot of the characters stay the same as in previous books, we do meet new ones. DeVries has a great voice, and manages to bring each of his characters and their unique speech patterns to life with his reading. Mostly, though, he had an ability to nail atmosphere that really worked for me. He was fun, but he was intense as well. He sucked me into a story and kept pulling me along at a relentless pace. He took a book in a series I love, and made enjoying it a memorable experience. That’s really what I look for in my audiobooks, and he delivered. 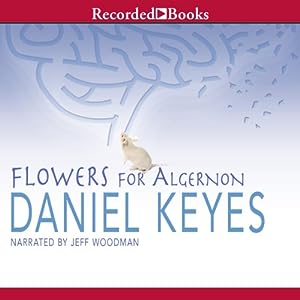 I realize that everyone on planet Earth has read this book already, but this was the first time I’ve read it. While this book absolutely laid me out, rung me dry, and emotionally eviscerated me, I also think it is one of the most important and profound books I’ve ever read. Listening to it was… intense, to say the least. I’m absolutely floored by what a good job Woodman did, slowly changing his voice, slowly evolving his character the way the book demanded him to evolve. He did it in subtle ways, where things were happening almost without my realization, and that just made the whole entire thing that much more profound. Really, in all things audiobook, I can’t recommend this one highly enough… just be prepared. Gird your emotional loins and get ready for a book that hits you straight in your soul.