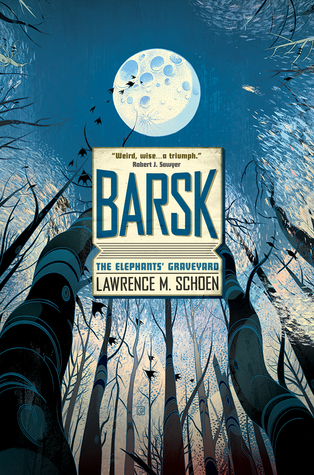 An historian who speaks with the dead is ensnared by the past. A child who feels no pain and who should not exist sees the future. Between them are truths that will shake worlds.

In a distant future, no remnants of human beings remain, but their successors thrive throughout the galaxy. These are the offspring of humanity’s genius-animals uplifted into walking, talking, sentient beings. The Fant are one such species: anthropomorphic elephants ostracized by other races, and long ago exiled to the rainy ghetto world of Barsk. There, they develop medicines upon which all species now depend. The most coveted of these drugs is koph, which allows a small number of users to interact with the recently deceased and learn their secrets.

To break the Fant’s control of koph, an offworld shadow group attempts to force the Fant to surrender their knowledge. Jorl, a Fant Speaker with the dead, is compelled to question his deceased best friend, who years ago mysteriously committed suicide. In so doing, Jorl unearths a secret the powers-that-be would prefer to keep buried forever. Meanwhile, his dead friend’s son, a physically challenged young Fant named Pizlo, is driven by disturbing visions to take his first unsteady steps toward an uncertain future.

I’ve put off reviewing this book for a while now. It’s going to be a really tough book to review. It’s a complex machine, and I really don’t think there is any way my review can do any of it the justice it deserves.

Barsk is a science fiction novel unlike any I have ever read before. It takes place in a future where humans no longer exist. Parts of the book felt very fantasy to me, and other parts were obviously interstellar, traveling between planets with diverse species and cultures. I don’t think I’ve ever read a book before that so comfortably and fluidly travels between science fiction and fantasy before.

Not only that, but the species that he has created are absolutely fantastic. The Fant are an elephant-like species that is misunderstood and discriminated against. Their society is rather secretive more to just keep their peace and culture than for any other reason. While they live happily and peacefully on their planet, they have their own issues, and one of the perspective characters, and albino-like Fant, is a perfect (rather heartbreaking) example of that.

This book doesn’t just focus on the Fant. There are other species and other planets that are visited and referenced. A ton of cultures are talked about and converge in subtle ways. The tug of war between cultures and understandings is a thread that runs throughout the novel and powers quite a bit of the atmosphere and various plot points.

I could say a lot about this book, and the fact is that I want to say just about nothing about it because I think going into this one blind is probably a huge benefit to readers. If you don’t know what to expect, you’ll appreciate the magic of Barsk more. This book really is unlike anything I’ve read before. It’s sprawling and deals with so many different, weighty, important topics and it does it so well. This book is vast, and it kind of defies my ability to talk about it in any real form.

I think this is probably as close as I’ve been to speechless regarding a book in the six years I’ve been writing reviews. There is just so much here!

I listened to Barsk in audiobook, and I completely recommend enjoying it this way. The narrator is absolutely perfect, and allowed me to really become absorbed in the story being told, which ended up being great. This book is packed full of deep thoughts and weighty emotions and atmosphere, and being immersed in it that much made reading it an unforgettable experience.

Schoen is a brilliant writer, creating such a vivid, well realized world and populating it with some of the most incredible characters I’ve had the luck to run across. What I enjoyed more than the plot, and the tension, the atmosphere, and the addicting nature of the book itself was all the details that Schoen paid attention to. There isn’t a single part of this novel, or the writing of it that has been overlooked. Not one. And that’s what makes it so powerful. It flows between genres, and examines important, uncomfortable topics, and it’s those details that makes it stick with readers.