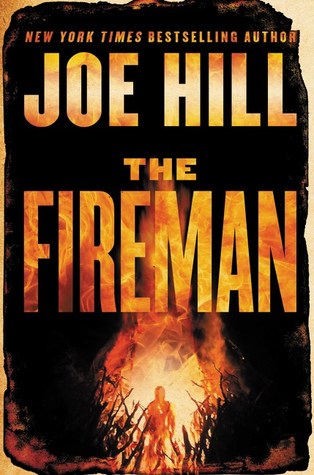 From the award-winning, New York Times bestselling author ofNOS4A2 and Heart-Shaped Box comes a chilling novel about a worldwide pandemic of spontaneous combustion that threatens to reduce civilization to ashes and a band of improbable heroes who battle to save it, led by one powerful and enigmatic man known as the Fireman.

The fireman is coming. Stay cool.

No one knows exactly when it began or where it originated. A terrifying new plague is spreading like wildfire across the country, striking cities one by one: Boston, Detroit, Seattle. The doctors call it Draco Incendia Trychophyton. To everyone else it’s Dragonscale, a highly contagious, deadly spore that marks its hosts with beautiful black and gold marks across their bodies—before causing them to burst into flames. Millions are infected; blazes erupt everywhere. There is no antidote. No one is safe.

Harper Grayson, a compassionate, dedicated nurse as pragmatic as Mary Poppins, treated hundreds of infected patients before her hospital burned to the ground. Now she’s discovered the telltale gold-flecked marks on her skin. When the outbreak first began, she and her husband, Jakob, had made a pact: they would take matters into their own hands if they became infected. To Jakob’s dismay, Harper wants to live—at least until the fetus she is carrying comes to term. At the hospital, she witnessed infected mothers give birth to healthy babies and believes hers will be fine too. . . if she can live long enough to deliver the child.

Convinced that his do-gooding wife has made him sick, Jakob becomes unhinged, and eventually abandons her as their placid New England community collapses in terror. The chaos gives rise to ruthless Cremation Squads—armed, self-appointed posses roaming the streets and woods to exterminate those who they believe carry the spore. But Harper isn’t as alone as she fears: a mysterious and compelling stranger she briefly met at the hospital, a man in a dirty yellow fire fighter’s jacket, carrying a hooked iron bar, straddles the abyss between insanity and death. Known as The Fireman, he strolls the ruins of New Hampshire, a madman afflicted with Dragonscale who has learned to control the fire within himself, using it as a shield to protect the hunted . . . and as a weapon to avenge the wronged.

In the desperate season to come, as the world burns out of control, Harper must learn the Fireman’s secrets before her life—and that of her unborn child—goes up in smoke.

NOS4A2 was the first Joe Hill novel I read, and hot damn I loved it. When I heard about The Fireman, I was there with bells on. Then I learned that Kate Mulgrew narrated the audiobook and wow, you couldn’t keep me away. She’s one of my favorite narrators, and before I go any further in this review, if you haven’t experienced Kate Mulgrew reading a novel to you, you need to. Stop what you’re doing, and give her a listen. The woman is amazing.

The Fireman takes place in our world, in a time that is very similar to ours, perhaps near future, but it doesn’t really matter. A virus (fungus, really) goes wild, decimating humanity, and breaking apart governments, families, infrastructure, and what have you. There is a lot of mystery surrounding Dragonscale (its nickname), and there is a ton of fear. Black and gold marks cover the skin of the infected, and then they suddenly combust and burn. As you can imagine, this causes a huge amount of fear for just about everyone. No one wants to burn to death. No one wants to get infected. No one really knows how it’s spread, and there is no cure.

So basically we have this spore that is killing out humanity. There’s a lot of panic, a lot of fire, and no real answers. It’s a dark, stark world, and the terror people feel in that situation is absolutely understandable. And oh, wow, Joe Hill really knows how to create a memorable, forbidding, terrifying atmosphere. I felt that throughout the novel, keenly.

Juxtaposed with all that darkness is our protagonist, Harper Grayson, who is obsessed with Mary Poppins, works as a nurse in an elementary school, and has a real way with children. She’s compassionate to a fault, and hardworking, and just about the happiest character I’ve ever read about in a novel. The world is falling apart, and Harper Grayson is singing children’s songs and comforting people while most are panicking. I couldn’t help but admire her, but I also couldn’t help but be annoyed by her. I mean, who in the hell is that happy naturally?

Harper took a lot of time for me to get used to. I’m sorry to say, she really drove me crazy throughout almost the novel. I grew to respect her immensely, but if she was a real person, I can absolutely promise you she’d be one of the last people I’d actually want to interact with (sorry, but it’s the truth). However, toward the last half of the book I really started to appreciate her skills, her ability to keep calm in dark, tense situations often allowed her to see the heart of the matter when most people would miss it for one reason or another.

She also is spending much of the novel getting to know herself, so it takes that amount of time for her to figure out that she’s not just a one-note wonder, but there’s more to her than all of that Mary Poppins stuff. She has some dark moods. She’s got some depth, and a whole lot of pain and admireable determination, but she was also a bright note in a very dark novel, and while she drove me crazy, I really can’t imagine a more perfect protagonist for a novel like this.

On the flip side is the Fireman, who was funny, and quirky, and I really had a lot of fun with him, despite the obvious pain of his past that’s hanging around his neck like a noose. He’s part of the group, and apart from the group, and his interesting perspective due to his educational background and that dark history he can’t quite deal with, gives him a really unique view into things, and how to deal with them. He’s mysterious and absolutely charming. In some ways, he and Harper are a lot alike – they are both part of the group, and apart from it, and their unique educational backgrounds give them interesting insights into what is happening with the spore. But the Fireman is darker, and a bit more brooding, and while he’s charming, he’s also evasive and mysterious.

A lot of this novel focuses on group dynamic, which is always interesting. When you get a bunch of people infected with a spore, all of which have lost everything, you have a perfect setup for a dramatic, emotional, unpredictable stew. Stir a few times, add some unexpected twists, some strained personal and interpersonal relationships, as well as a world that is burning all around them and you’ve got The Fireman. In the middle of all this are two characters who both stand apart for various reasons.

The Fireman was a lot of things, but it was absolutely infuriating in the best sort of ways. So much happened, and so much of this novel hinged on how people handle horrible situations, group think, and the power of communication. This novel kept me hanging on. Right when I thought I knew what would happen next, Hill would turn the other way. The novel more or less ended how I expected it to end (which had me almost crying at work, by the way) – but I didn’t figure out how I expected it to end until I was just about there at the end. Until then, I was satisfied not really predicting anything, and just enjoying the infuriating dynamics of this twisted group of people who were trying to weather this storm.

This novel, however, wasn’t perfect. There was a romance that appeared, and while I expected it to happen, it just happened with very little warning. All the sudden these two people were in love and I was trying to figure out when in the hell that happened. Like I said above, Harper annoyed the living daylights out of me throughout much of the novel. While I understand why she was the way she was, and I appreciate it, she really frustrated me and I couldn’t help but think that there had to be a way to portray a happy, dedicated, determined nurse in a less annoying way. The culmination of the drama between Harper and her ex-husband felt a bit paint-by-numbers, and a few other side plots felt that way as they met their end, as well.

Despite that, I really enjoyed this novel. It was very well thought out, and very thought provoking. It’s really rare that a novel can infuriate me and frustrate me as much as this one did, and that really says something good about the book itself. This book is supposed to frustrate you, and it did. In spades. The atmosphere was fantastic. The characterization was well done on all fronts. The writing was amazing.

And Kate Mulgrew was a spectacular narrator.