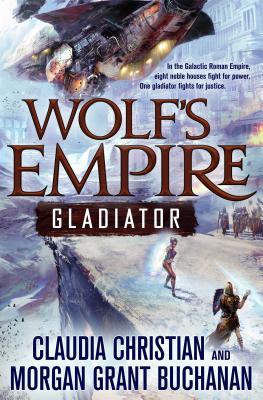 A sweeping science-fiction saga of revenge set in a future in which the Roman Empire never fell, by actress Claudia Christian
When her mother and brother are murdered, young noblewoman Accala Viridius cries out for vengeance. But the empire is being torn apart by a galactic civil war, and her demands fall on deaf ears. Undeterred, Accala sacrifices privilege and status to train as a common gladiator. Mastering the one weapon available to her—a razor-sharp discus that always returns when thrown–she enters the deadly imperial games, the only arena where she can face her enemies.

But Fortune’s wheel grants Accala no favors—the emperor decrees that the games will be used to settle the civil war, the indigenous lifeforms of the arena-world are staging a violent revolt, and Accala finds herself drugged, cast into slavery and forced to fight on the side of the men she set out to kill.

Set in a future Rome that never fell, but instead expanded to become a galaxy-spanning empire, Accala’s struggle to survive and exact her revenge will take her on a dark journey that will cost her more than she ever imagined.

I meant to review this book last week before my kid got sick (and we spent a huge chunk of the week in the hospital) and all sorts of fun things happened. I apologize for the wait, but better late than never, right?

Wolf’s Empire is a book I honestly didn’t want to read at first, nor did I think it would interest me. Then I thought about it a bit more, and I realized I was insanely curious about how the Roman Empire would translate to a futuristic space setting. And a strong female protagonist, a gladiator, no less, was compelling. So I decided to take a chance. What am I out if this book doesn’t pan out? Nothing.

Wolf’s Empire is quite a layered book. This one tells the story of Accala, as she tries to navigate and defy many gender roles, and social roles, and become her own woman living her own way in this futuristic world. While most of the story revolves around her role as a gladiator, that’s really only a tool used to show readers everything else that’s going on.

I was really surprised by how dark this novel was. I expected dark, I mean, it does feature gladiators after all, but I didn’t expect it to be so personal, layered, or all encompassing. This book is about so much more than fighting in the ring, it’s about a woman’s struggle for the right to her own life, her thirst for vengeance over past wrongs, there’s a bit of a mystery involved, a boatload of tension, and some personal themes like addiction are played out as well.

Wolf’s Empire is a tapestry of a lot of personal and social themes that are not only important in the novel itself, but absolutely pertinent for the societies we live in now, and Accala was a strong, if somewhat distant protagonist, and the perfect character to tell this surprisingly deep and dark story to readers.

The plot had a ton of twists and turns, and I stopped trying to expect or anticipate any of it. I eventually got to the point where I just had to sit back and enjoy the ride, and what a tumultuous ride that was. Things are bumpy, and difficult, and there is a ton of strained relationships between characters, and even Accala’s relationship to herself.

The beautiful part of Wolf’s Empire, the aspect of it that really impressed me the most, was how well some of these delicate themes were handled. Gender politics, for example, is a volatile subject at the best of times, but the authors of this novel examined this with poise and grace, and managed to present it in a thought provoking, and important way. And despite the fact that there were so many tug-of-war games going on between Accala and various aspects of society, relationships, addiction an whatever else, Accala never lost that sense of who she was. She was so incredibly real, which made all these deeper themes so much more poignant for the reader.

The gladiator stuff was an important focus of the novel, but it wasn’t the entire novel. It was a plot device, and an expertly used one. The real meat of this book happens just about everywhere else (and yes, a bit in the ring as well). The plot’s twists and turns are just as interesting, and nicely balanced, with the personal and political aspects of the novel. This was all paired with some absolutely superb writing, and a surprisingly well developed far future world (and society).

Wolf’s Empire left me with a ton of weighty things to think about, and I ended up enjoying this novel a whole lot more than I expected or anticipated. I couldn’t put it down, and even now that it’s over I’m thinking about numerous aspects of this novel. And that writing – wow. What excellent writing, it’s descriptive without being overwhelming, and never turns into the purple prose that I dread so much.

So basically what I’m saying is, don’t hesitate. This book is smart, well crafted, and superbly written. It will leave you plenty to think about, and plenty of surprises to keep you entertained. Wolf’s Empire is a true gem.