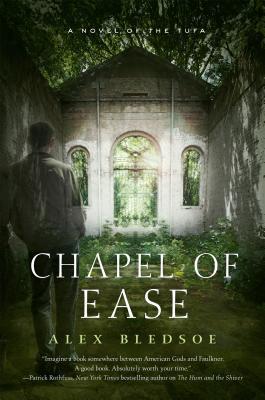 When Matt Johanssen, a young New York actor, auditions for “Chapel of Ease,” an off-Broadway musical, he is instantly charmed by Ray Parrish, the show’s writer and composer. They soon become friends; Matt learns that Ray’s people call themselves the Tufa and that the musical is based on the history of his isolated home town. But there is one question in the show’s script that Ray refuses to answer: what is buried in the ruins of the chapel of ease?

As opening night approaches, strange things begin to happen. A dreadlocked girl follows Ray and spies on him. At the press preview, a strange Tufa woman warns him to stop the show. Then, as the rave reviews arrive, Ray dies in his sleep.

Matt and the cast are distraught, but there’s no question of shutting down: the run quickly sells out. They postpone opening night for a week and Matt volunteers to take Ray’s ashes back to Needsville. He also hopes, while he’s there, to find out more of the real story behind the play and discover the secret that Ray took to his grave.

Matt’s journey into the haunting Appalachian mountains of Cloud County sets him on a dangerous path, where some secrets deserve to stay buried.

I absolutely love Alex Bledsoe’s Tufa novels. Each one seems to be better than the last, and this one was probably my favorite so far. It stands apart from the others for numerous reasons, all of which makes Chapel of Ease something quite special.

One thing that makes this novel so different than the others is the fact that the protagonist, Matt, is an outsider who is sort of thrust into the role of looking in on the Tufa and their lives. Matt is an actor in New York City. He meets Ray, who is writing a play about his people (The Tufa). They become friends, but Ray mysteriously passes on from this mortal coil and Matt decides that he wants to take his ashes back to his family in Tennessee.

So right off the bat, this book is from an outsider’s perspective, and I found that to be incredibly refreshing. It’s not that I’m tired of reading about the Tufa and their adventures, but Matt added a rather diverse, unique perspective to things that really made me appreciate just how magical these books really are.

And really that’s what Matt and this outsider’s perspective did for me. These books are absolutely enchanting and there are so many reasons why I love them – many of which I will go into shortly. However, Matt really reminded me just how magical this world that Bledsoe has created really is. Matt is this fantastic merging of our world, the mundane world, with the magic of the Tufa and the high mountains that they live in.

Chapel of Ease is a bit of a mystery wrapped up in an all-too-human drama. There’s love and loss, and then love again, and plenty of mystery as well as some confrontation. Bledsoe really manages to keep his readers hooked on the immense power of emotions that infuse every page of this book. I really can’t highlight that enough. This book is packed full of emotion, and it’s not just emotion, but it’s the kind of emotion that gets under your skin, worms its way into your heart, and forces you to feel exactly what these characters are feeling. It’s…. wow. It’s incredibly well done.

As I mentioned above, there is this merging of mundane and magical, and these powerful emotions are one of the subtler, but important, parts of this. It’s interesting to see just how similar people live on both sides of this magical divide. The city of New York, of course, is a bit flashier, but the human drama, the love and loss and tension involved in that, is all too similar to the simpler, but just as dramatic lives in Tennessee. The juxtaposition was very well done, and really hit me pretty hard (in the best sort of way). It made the love story and intense connection that takes place that much more delightful. It’s two people from two worlds that really aren’t that different after all.

The mystery involved with the chapel is handled absolutely perfectly. Bledsoe refocuses what the mystery is really about, and narrows the focus to what really matters (but is often ignored). It’s not about the ending, it’s about the journey, and that’s really the message that this book drives home. I never did get a satisfying answer to all things involving the chapel, but I didn’t mind in the least. The journey to get to that wonderful ending was so amazing, intense, and wonderful that I didn’t really care about what was buried in the chapel.

Chapel of Ease was incredible. I love every one of Bledsoe’s Tufa books, but this one really hit it out of the park. It’s diverse, and different. This book is a graceful merging of magic and mundane that charmed me to my core. Matt is a fantastic protagonist, who reminded me of just how magical this world is. Bledsoe reminds readers that it isn’t necessarily about the ending, or having all of your questions perfectly answered – it’s about the journey.

I can’t praise this book enough.