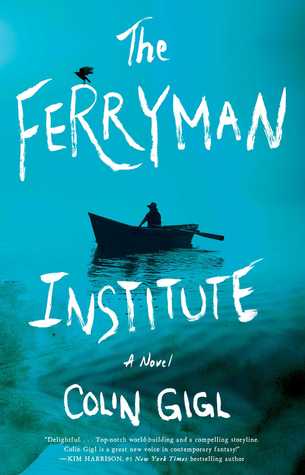 In this stunning, fantastical debut novel from a bold new voice in the bestselling traditions of Christopher Moore and Jasper Fforde, a ferryman for the dead finds his existence unraveling after making either the best decision or the biggest mistake of his immortal life.

Ferryman Charlie Dawson saves dead people—somebody has to convince them to move on to the afterlife, after all. Having never failed a single assignment, he’s acquired a reputation for success that’s as legendary as it is unwanted. It turns out that serving as a Ferryman is causing Charlie to slowly lose his mind.

Deemed too valuable by the Ferryman Institute to be let go and too stubborn to just give up in his own right, Charlie’s pretty much abandoned all hope of escaping his grim existence. Or he had, anyway, until he saved Alice Spiegel. To be fair, Charlie never planned on stopping Alice from taking her own life—that sort of thing is strictly forbidden by the Institute—but he never planned on the President secretly giving him the choice to, either. Charlie’s not quite sure what to make of it, but Alice is alive, and it’s the first time he’s felt right in more than two hundred years.

When word of the incident reaches Inspector Javrouche, the Ferryman Institute’s resident internal affairs liaison, Charlie finds he’s in a world of trouble. But Charlie’s not about to lose the only living, breathing person he’s ever saved without a fight. He’s ready to protect her from Javrouche and save Alice from herself, and he’s willing to put the entire continued existence of mankind at risk to do it.

Written in the same vein as bestselling modern classics such as The Eyre Affair by Jasper Fforde and A Dirty Job by Christopher Moore, The Ferryman Institute is a thrilling supernatural adventure packed with wit and humor.

The Ferryman Institute is the kind of book that appealed to me instantly. It’s urban fantasy, but of the off the beaten path sort, and promised some introspection and some humor. Count me in.

Charlie is a ferryman. In fact, he is the ferryman. He is the highest ranked ferryman in the business and has spent 200+ years wowing his superiors with his skills. The Ferryman Institute is actually incredibly complex, and really interesting. There are a lot of ins and outs to it, plenty of rules, lots of lines that people have to toe. Charlie’s job is to convince a soul to cross into the afterlife of their own free will. He works with a navigator, whose job is to determine when exactly this moment will occur, and there are plenty of other details involved, too.

So Charlie has been dealing with death for a long, long time, and it’s been getting him down. He’s been trying to transfer out of the Ferryman Institute, but he keeps getting his transfer requests rejected. He has a lot of humor, but he’s also a rather tortured soul, as anyone would be if they’ve been dealing with all sorts of different kinds of death for such a long, long period of time.

Events transpire, and Charlie is given an out. It’s rather surprising, but he gets a letter from the president of the insitute that gives him the option to help a suicidal Alison’s soul pass into the afterlife, or find her beforehand and save her, which would cause him to stop being a ferryman. And this is really where the book starts to take off.

There are some parts of the book, especially toward the beginning, where this dilemma that Charlie faces is sort of dissected a little too much, but after that the book sort of switches focus. Charlie and Alison make a fantastic pair. They are both such unique characters, each with their own set of memorable characteristics. And quickly after that the focus turns from Charlie’s life dealing with death, to the business of dealing with life.

The antagonist is fantastic, and it is obvious that Gigl worked hard to portray a protagonist that his readers would understand, but also sympathize with. His actions were understandable, and his motives were something that I could realte to in some way. That’s not saying that I really liked him or agreed with him, but he was a really well crafted antagonist and I absolutely love it when authors create a good antagonist.

This book is funny, and that surprised me. There are a lot of small details scattered throughout that just made me laugh. There’s a moment regarding meatloaf in the beginning that made me laugh. Charlie’s form of entertainment by basically throwing himself off a cliff to pass time was both morbid and humorous. And while a lot of the topics in this book are rather weighty, it’s balanced quiet well with a nice dash of humor that I really found refreshing. Gigl strikes a nice balance between morbid and lighthearted.

At the heart of it, Gigl makes readers analyze what makes life so worth living, and he does it in a way that will make you laugh, and I appreciated that. Sometimes it’s nice to pick up a rather lighthearted read that easily sweeps you along, and that’s exactly what The Ferryman Institute accomplishes.

This is a surprisingly fun book. It’s well written, full of action and laughs, and plenty of adventure. Gigl manages to make readers think about heavy topics in a lighthearted way, and I appreciated his nice balance of the two. Some parts of the book were a little predictable, and I felt a little hit over the head with some of the information, but other than that, this book was superb, and the characters were just as fantastic and memorable. If you’re in the mood for something different, lighthearted and thought provoking, check out The Ferryman Institute.