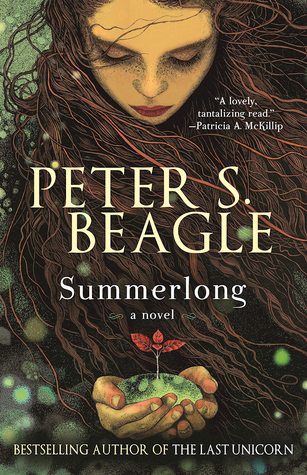 One rainy February night, while dining at a favorite local haunt, Abe and his girlfriend Joanna meet waitress Lioness Lazos, new in town and without a place of her own. Fascinated and moved by the girl’s plight, Joanna invites Lioness to stay in Abe’s garage. Lioness is about to alter the lives of Abe, Joanna and those around them forever.

This is the first book I’ve ever read by Peter S. Beagle, and I honestly regret the fact that I haven’t read any of his books earlier. Summerlong is a subtle book, but it is completely engrossing, and it really shows off Beagle’s skills. He has this uncanny ability to balance perfect prose with a thoughtful storyline, and never does one overwhelm the other.

Summerlong tells the story of a middle-aged couple (Abe and Joanna) living a comfortable life outside of Seattle. These two people are deeply in love, and have a long and layered relationship. Beagle instantly hits readers with just how evolved, comfortable, and balanced our two protagonists are.

The development of this relationship really sets the stage for the rest of the novel. In fact, this novel is heavily introspective, interpersonal, focusing on relationships with yourself, with others, actions and reactions. Most of the action in this novel happens below the surface. Some readers might find this slow moving, even boring at times. However, if you’re one of those readers who enjoys all of the below-the-surface details, Summerlong will be full of endless delights.

Summerlong isn’t just about relationships – their formation and their endings, and all the twists and turns along the way – there is also a healthy dose of Greek mythology in this novel. It’s a story that just about every reader will be familiar with, and it is played out perfectly in this book. The story of Lioness is both innocent and compelling. She’s a character that draws you in, and lights up a comfortable life, bringing change along with her.

Those changes, the push and pull of Lioness, her draw on the lives of those around her is really what propels the story forward. You won’t always like what happens, the decisions made, the way things play out, but Beagle does a great job at exploring actions and reactions. How one decision can cause a ripple effect. He does this in a richly developed world with incredibly textured, realistic characters. It’s nothing short of amazing.

I’d consider Summerlong magical realism. Much of this book is rather mundane. The world is the world as we know it, and there isn’t much variation. Lioness and her storyline brings some fantasy to things, kind of twists things to reflect the magical a bit. The magic is just as subtle as much of the plot, and it sort of weaves through the book in a way that feels incredibly natural, so natural that it is easy to overlook, but the sense of wonder infuses every page of this novel.

Beagle’s writing is spectacular. I haven’t really ever read a book written in a way that just drowns me in the story and I didn’t mind that at all. The world is fantastic; the characters are incredibly well-rounded. The plot is subtle, but engrossing. Summerlong is one of those books that just nailed it in every possible way. It’s different, it’s a soft story told in a powerful way. It’s startlingly human, and makes you think. It’s one of those books that will stick with you, and I’m incredibly glad it does.