Even White Trash Zombies Get the Blues – Diana Rowland 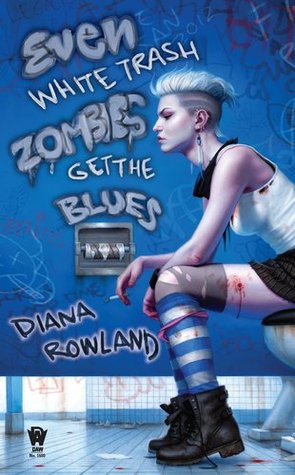 Angel Crawford is finally starting to get used to life as a brain-eating zombie, but her problems are far from over. Her felony record is coming back to haunt her, more zombie hunters are popping up, and she’s beginning to wonder if her hunky cop-boyfriend is involved with the zombie mafia. Yeah, that’s right—the zombie mafia.

Throw in a secret lab and a lot of conspiracy, and Angel’s going to need all of her brainpower—and maybe a brain smoothie as well—in order to get through it without falling apart.

It’s no secret that I’m a huge fan of Diana Rowland’s White Trash Zombie series. It’s a series I never ever thought I’d start, but I downloaded the audiobook and it was amazing. It is, hands down, one of the best audiobooks I’ve ever listened to. Ever. If you want to listen to a fantastic, fun, well produced audiobook, then please get your hands on all the books in this series, because damn.

Even White Trash Zombies Get the Blues is the second book in this series. Angel Crawford is getting her feet under her, so to speak. She’s got a boyfriend, and things seem to be sorting out (with effort) with her father. Then, of course, in typical Angel fashion, she ends up in the middle of a whole bunch of stuff and rather alone with it all.

Angel is a strong protagonist who isn’t afraid to blaze her own trail or make her own way, which ends up being a strength but also kind of gets her into more trouble. Somehow everything ends up working against her. She’s out of her job, she’s in the newspapers, her and her boyfriend have some issues. She’s alone and in a mess, and investigating something that basically only she can see.

It’s, oddly enough, at this point, when Angel is losing just about everything and all alone, when I started really liking this book. Angel is a hell of a gal, and it’s impossible not to love her. She’s unique and strong, and her past is fantastic, but when she’s alone and really relying on herself and her own wit, she really shines. Angel works well with others, but she’s better alone. It’s when her voice is the strongest, when she seems to be more sure of herself and her place in the world.

Things are interesting in this novel. There’s a mafia that we are introduced to, and Angel seems to get ties to them. A bit of a backstory is developed for her cop boyfriend, which makes him a little more interesting and a little… gullible? Darker? I’m not sure where I’m going to put him, still. Then we’re introduced to a lab, which, as expected, is doing some studies that are a bit under the level. And Angel starts drawing conclusions, and things get pinned on her, and no one really believes her and things get going as she investigates.

And Angel eventually finds herself in some tight situations, and there’s an ending that I both expected but didn’t expect, and everything gets kind of neatly wrapped up while some ends are left open. All in all, I really enjoyed this book, but probably not as much as the first one. Some parts felt like they dragged on a bit too long, and others felt like they could have been a bit longer. In spite of that, I enjoyed how many layers the characters had added onto them. In a book already filled with some of the best developed characters I’ve run across in the books I’ve read, having even more intricacies added to them, and the world they live in, was marvelous.

The audiobook, as I mentioned above, was perfectly, superbly narrated and produced. I honestly can’t recommend it highly enough. I tried to read one of the books after I listened to the first book in this series and reading it just wasn’t working. This is one of those rare series that has made it impossible for me to read the book, and it’s also made me interested in zombies, which is something that I vowed I’d never be interested in.

Even White Trash Zombies Get the Blues is a great book, maybe some pacing issues, and the ending is a little predictable (but also unpredictable). This book really shines due to the development of characters, relationships, and the world Angel lives in. Situations get incredibly, painfully intense, but Rowland never loses her humor, and neither does Angel. It’s that ability to balance tension with humor, to make the darkest of situations manageable and even laughable, that makes this book so wonderful. It’s hopeful, an epic story of one woman’s drive to completely change her life and permanently alter her situation for the better, couched in this hilarious, adventurous, kick-ass, action packed story.