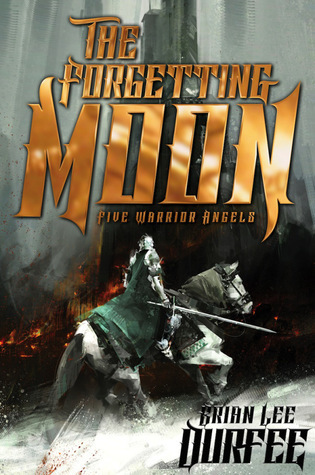 A massive army on the brink of conquest looms large in a world where prophecies are lies, magic is believed in but never seen, and hope is where you least expect to find it.

Welcome to the Five Isles, where war has come in the name of the invading army of Sør Sevier, a merciless host driven by the prophetic fervor of the Angel Prince, Aeros, toward the last unconquered kingdom of Gul Kana. Yet Gault, one of the elite Knights Archaic of Sør Sevier, is growing disillusioned by the crusade he is at the vanguard of just as it embarks on his Lord Aeros’ greatest triumph.

While the eldest son of the fallen king of Gul Kana now reigns in ever increasing paranoid isolationism, his two sisters seek their own paths. Jondralyn, the older sister, renowned for her beauty, only desires to prove her worth as a warrior, while Tala, the younger sister, has uncovered a secret that may not only destroy her family but the entire kingdom. Then there’s Hawkwood, the assassin sent to kill Jondralyn who has instead fallen in love with her and trains her in his deadly art. All are led further into dangerous conspiracies within the court.

And hidden at the edge of Gul Kana is Nail, the orphan taken by the enigmatic Shawcroft to the remote whaling village of Gallows Haven, a young man who may hold the link to the salvation of the entire Five Isles.

You may think you know this story, but everyone is not who they seem, nor do they fit the roles you expect. Durfee has created an epic fantasy full of hope in a world based on lies.

I have been having a really hard time getting into epic fantasy recently, and an even harder time getting into grimdark. I put off reading this book due to that. I figured I just wouldn’t be in the right frame of mind to really appreciate it. One day, however, I decided to give it a go. I was quickly addicted. That’s saying something right there. When you realize just how hard I’ve been struggling with both epic fantasy and grimdark, finding a book that is both of those things addicting is almost an act of god.

Durfee is a fellow Utahan, which interests me because it’s Utah, and I live here, and I feel all warm and fuzzy inside when I think about how vibrant my local SciFi community really is. We have quite a few very talented authors in this state. There must be something in the water.

Durfee’s debut is hella ambitious. It’s long. I mean, this sucker is a doorstopper, and it’s complex, weaving between a few storylines that all interact, but are each their own unique thing, as well. What really impressed me was just how well Durfee managed to keep all these stories separate and surprising without ever making anything feel incredibly formulaic. Each part of the book is its own unique, and memorable.

This book is dark, and there is a lot of violence and none of it is really glossed over. Occasionally it felt a bit gratuitous, but not too often. It’s a violent, brutal world, ad Durfee’s writing reflects that. Innocent people have hard things happen to them (as do not so innocent people), and Durfee carries the reader through the intricacies of all of it. There are a few moments that made me think that this book might need trigger warnings for some people, but generally speaking, if you go into this knowing it’s going to be a no-punches-held-back grimdark epic fantasy novel, you’ll know what you’re getting into.

Part of what makes me pretty exhausted with epic fantasy these days is a European/western setting, and this book has exactly that, complete with royal families, royalty, commoners and whatever else you can think of. Yeah, I’m a bit exhausted with that, but Durfee got me past that pretty easily with his well-crafted characters. Furthermore, the world itself is really well done, and while it is set in a European-esque setting, there are enough details here that kept me interested. There are secret societies, backhanded dealings, plots that had a ton of twists, passageways, and whatever else you can throw in there. I’m a sucker for the details, and it’s those details that took a setting that could have easily had me ho-humming, and launched it into something that kept me interested. Ah, those beautiful, beautiful details.

This book is long (I’ve said that already), so it’s pretty easy to say that once you start it out, you’ll really have no idea where it ends up. There were plenty of points along the way that had me sitting back saying, “Damn. I did not expect that.” The plot moves pretty quickly, and all those different threads I mentioned earlier converge and depart at different times. The story is being told from both sides of the main conflict, and the characters are so well crafted that it’s hard to really hate any of them. Even the guys I’m probably supposed to think of as the “bad guys” really worked for me. I will give it to Durfee, he can write a hell of an antagonist.

If I had an issue with the plot at all, it would be regarding the flow. Some scenes felt like they dragged on a little too long, while there were other points where I would have loved more detail. Furthermore, some aspects of the book were kind of hard for me to believe, but other than those issues, things came together quite well, and I often found myself wondering just how many notes, charts, graphs, maps and whatever else Durfee has littered around his house. This is a book that must have required an absolutely shocking amount of notes and outlines to pull off, and all those beautiful details and intricacies that I love so much prove that.

So, The Forgetting Moon.

It set itself out to be some huge epic grimdark saga that will keep readers hooked, and it does that. It really, really pulls everything it sets out to accomplish off. Is it perfect? No, but perfect things are boring, and I tend to think the flaws in this one keep it interesting. It’s raw, and real. It’s a brutal tome that had a ton of thought, planning, and energy poured into it, and damn, it wowed me. I mean, it got me, the woman who has said to her husband several times over the past year, “I swear to God I am not going to read another grimdark novel for at least three years” to actually read this book, and be glad I read it. I honestly cannot wait for the next book in the series.

Thanks for making me a believer in the glory of grimdark again, Brian Lee Durfee. You rock.