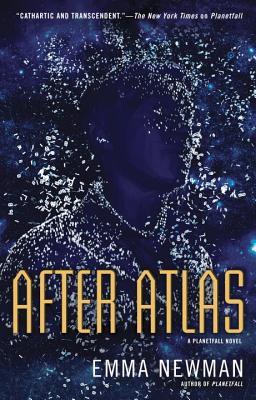 Govcorp detective Carlos Moreno was only a baby when Atlas left Earth to seek truth among the stars. But in that moment, the course of Carlos’s entire life changed. Atlas is what took his mother away; what made his father lose hope; what led Alejandro Casales, leader of the religious cult known as the Circle, to his door. And now, on the eve of the fortieth anniversary of Atlas’s departure, it’s got something to do why Casales was found dead in his hotel room—and why Carlos is the man in charge of the investigation.

To figure out who killed one of the most powerful men on Earth, Carlos is supposed to put aside his personal history. But the deeper he delves into the case, the more he realizes that escaping the past is not so easy. There’s more to Casales’s death than meets the eye, and something much more sinister to the legacy of Atlas than anyone realizes…

You know, it’s really hard for me to put into words how much I loved this book. I loved it. I loved it so much that I’m kind of in shock from how much love I felt about this book. After Atlas was just about everything I never knew I wanted it to be.

This is the second book in Emma Newman’s Planetfall series. While you can read the books in this series in order, it isn’t really necessary. You won’t get many answers or insights regarding the first book in this second book, and if you just start out on this book you’ll be just fine. Basically, the books are really good at standing alone, and don’t really need each other to prop themselves up. Start here. Start on her other book. Start wherever, and may blessings be upon you.

After Atlas focuses on Carlos Moreno, who was a baby when Atlas left. He was raised in a cult and had quite an exotic, memorable history. He reveals bits and pieces of his history as he goes through the book, and it gets pieced together fairly easily. It’s pretty logical to see the progression from his emotionally jarring past, to the rather caustic, stand-offish man he appears to be in the book.

Carlos is a hard worker, and he has a talent for investigation. He works on an indentured basis, and is basically owned by his boss, GovCorp, and the like. He works for them, and he pays off his debt to them through his work. In a world where most people are connected somehow, Carlos stands out because he works hard not to be connected. His past has made him infamous, and journalists, documentary filmmakers, etc trail him wherever he goes.

So Carlos is an interesting guy. He’s rather isolated, he’s famous and hates it, he has an uncomfortable past that you can feel weighing down every page of the book. He’s basically owned by the people he works for, and there is a lot of pent up emotion that sort of swells in him throughout the novel. It’s felt keenly, and his wry humor, and caustic sarcasm are ways he deals with that.

All of this is to say, Carlos is a fantastic character, his story is wonderful, and his voice is absolutely unique.

As I mentioned above, Carlos is an investigator. The book really circles around a murder mystery that strikes Carlos close to his heart, for numerous reasons. He is called in to investigate, and this is really where things go from interesting to fascinating. Newman wrote a crime who-done-it mystery like she was born to do it, flawlessly weaving together a plot that is absolutely relentless, and a character that is completely, absolutely memorable.

Newman also had a knack for dropping clues and cues in drips and drabs. There are points where you’re picking up information, and you don’t even realize you’re doing it until the “Ah ha!” moment appears in the text. It’s effortless, flawless, and quite a skill she has. I was pleased with the numerous plot twists, and I loved the way she strung her readers along throughout a novel that was just stunningly written.

Newman ignores no details, and she leaves no stones unturned. She isn’t afraid to put her characters through their paces, and likewise make her readers work for their information. The ending is satisfying, and the story is incredible. This is my favorite book of Emma Newman’s so far. She’s a hell of an author, but After Atlas really showed her skill for what it is. She’s a force to be reckoned with.