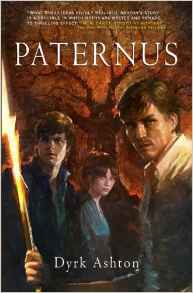 The gods and monsters of myth have returned. In a breathtaking story that takes place in a single day, two ordinary humans are caught up in the final battle of a war that’s been waged since the dawn of time.

Gods, monsters, angels, devils. Call them what you like. They exist. The epic battles between titans, giants, and gods, heaven and hell, the forces of light and darkness. They happened. And the war isn’t over.

17 year old Fi Patterson lives with her stuffy English uncle and has an internship at a local hospital for the aged. She doesn’t know what she wants to do with her life, misses her dead mother, wonders about the father she never knew. One bright spot is caring for Peter, a dementia-ridden old man whose faraway smile can make her whole day. And there’s her conflicted attraction to Zeke — awkward, brilliant, talented — who plays guitar for the old folks.

Fi and Zeke’s worlds are shattered as their typical everyday concerns are suddenly replaced by the immediate need to stay alive — and they try to come to grips with the unimaginable reality of the Firstborn.

“Keep an open mind. And forget everything you know…”

Paternus has been called “American Gods meets The Lord of the Rings,” and claimed to be reminiscent of Roger Zelazny’s Lord of Light as well as Clive Barker’s Weaveworld.

Contemporary Fantasy / Mythic-Fiction. New Adult Fiction – as opposed to Teen or YA, though savvy 16 or 17 year olds might survive without permanent damage.

This book was part of the SPFBO.

This year started out far different than I anticipated. My 16 month old landed a case of pneumonia and I ended up with a bad case of bronchitis. In the spirit of self-care, I had to take quite a bit of time off from pretty much everything. My baby is getting better, but I’m still quite sick, and until I get better, reviews will be random and infrequent. The problem is, I keep coughing, and I’m coughing so much and so hard it’s almost impossible for me to type out a review. Case and point, it took about 45 minutes for me to get this far in this review because I had to stop so often to hack my lungs out.

Paternus is one of those books that doesn’t really fit anywhere, and because of that it stands out from the crowd. When I look around on Goodreads and elsewhere, I see this book being compared to a lot of other books or authors. People have compared it to American Gods, to Dean Koontz, Scott Hawkins, and others. I can see where there are similarities, but I also kind of think that comparing this book to others is doing it a bit of an injustice. This book is its own animal, and I think it needs to be recognized as such.

There are a few things that Ashton did incredibly well, one was which was those pesky little details that I love so much. Ashton must have spent a ridiculous amount of time doing research and really picking over every aspect of his book. Everything from the mythology, to the magic system, to the way he subtly twists his world is just perfectly thought out, and almost flawlessly executed.

The story flowed nicely, and I really loved Ashton’s use of atmosphere, which is felt in just about every page. This book is dark, and it starts out dark, and absolutely finishes that way. There are some graphic scenes, but nothing gratuitous. Ashton makes you feel the almost oppressive tension that builds throughout the book. He keeps the plot moving nicely, and in order to make the details that finely honed, and the atmosphere that intense, you have to be an incredible author, and Ashton certainly is.

Paternus isn’t a perfect book. The first chapter was a little rough, and I felt like it took some time to get things moving to a point where I was absolutely gripped by the book, but it did happen. Furthermore, the ending left me wanting a bit. I wonder if this is the first book in a series? I felt like Ashton could easily build on the field he’s set out in this novel and it would be unfortunate if he didn’t. Another little niggle I had was regarding some infodumps that were sprinkled throughout the book. They weren’t often, and with the fantastic writing they were easy to overlook, but they were there, and they should be mentioned.

All in all, Paternus really surprised me. It’s not perfect, but that’s fine, it doesn’t need to be. I was absolutely blown away by the amount of research and detail that went into this book. The writing seemed to effortlessly flow, and the atmosphere was powerful. Yes, there were some flaws, but perfect books are boring, and in the end I was glad that this book wasn’t perfect. Paternus is its own beast, and it absolutely deserves a read.