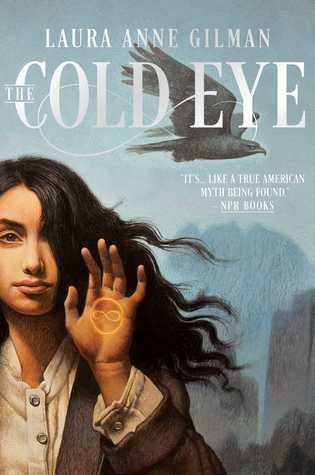 In the anticipated sequel to Silver on the Road, Isobel is riding circuit through the Territory as the Devil’s Left Hand. But when she responds to a natural disaster, she learns the limits of her power and the growing danger of something mysterious that is threatening not just her life, but the whole Territory.

Isobel is the left hand of the old man of the Territory, the Boss—better known as the Devil. Along with her mentor, Gabriel, she is traveling circuit through Flood to represent the power of the Devil and uphold the agreement he made with the people to protect them. Here in the Territory, magic exists—sometimes wild and perilous.

But there is a growing danger in the bones of the land that is killing livestock, threatening souls, and weakening the power of magic. In the next installment of the Devil’s West series, Isobel and Gabriel are in over their heads as they find what’s happening and try to stop the people behind it before it unravels the Territory.

The Cold Eye was pretty much everything I wanted it to be, plus some. This is another Weird West novel, which is a (sub)genre that I’m really learning that I love. Gilman hits the readers hard with atmosphere from the get-go. This is a sort of unexplored, misunderstood, confusing area of the continent, and Isobel is rather untried, still learning who she is in the middle of it all. Mix those two together, and you have a ton of uncertainty, and a nice dash of this sort of unexplored territory. It’s almost haunting, and once the mystery really takes root, that haunting vibe sunk deep into my skin and gave me some really unexpected chills.

Isobel has grown a lot, and while there is a gap of time between the first book and the second, it’s not enough to account for how self-assured she currently is. It’s the events of the previous book, and her bond with her mentor that have forced her to grow. She might not understand the land, or really understand her role in it, but she is a lot more comfortable in her own skin, and she doesn’t shy from mystery, or unexplained phenomena. There is plenty of uncertainty in this book, a lot of it circles around Isobel trying to figure out what the hell is going on, but somewhere between the first book and the second book she stopped being a young adult, and started being a self-assured woman.

Her relationship with Gabriel has also changed. They are connected, and their bond is sort of father/daughter, but there’s also an undercurrent of something else there, as well. Or maybe I just imagined that. Gabriel is quite attached to Isobel, and incredibly invested in her learning and progress, and they work well together. The big difference is, in this book Gabriel is content to take his cues from Isobel, rather than urge her forward and explain things along the way. He lets her do her thing, and he waits in the wings, ready to answer questions or offer assistance if needed.

The mystery is fantastic, and it’s just as haunting as the landscape where the whole thing takes place. The book moves along quickly, and it’s incredibly gripping. Again, it’s the atmosphere that makes it work so well, and the progression of the characters. I was honestly surprised by how eerie I felt this book was. The world is larger, more unexplored, more undefined than it was in the first book, and I loved the way that Gilman created this sprawling, haunting landscape, and filled it full of people and cultures that felt so unbelievably real.

Things wrap up, and the ending was perfect for the book itself. I’m anxious to see what Gilman can come up with next. This series is one of my favorites. I had high expectations going into this book, and I’m pleased to announce that Gilman surpassed every single one of them. If you haven’t started this series yet, why not? It’s one of the best things in the genre right now.