The Heart of What Was Lost – Tad Williams 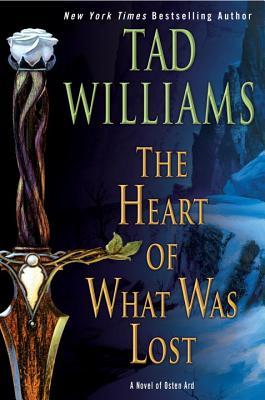 The Heart of What Was Lost takes place in the half-year after the end of To Green Angel Tower, and tells of the attempt by Isgrimnur and a force largely made up of Rimmersgard soldiers to destroy the remaining Norns as they flee back to their homeland and their mountain. It also answers some questions about what actually happened in the immediate aftermath of the fall of Green Angel Tower.

I’m embarrassed by how long it’s taken me to get to writing this review, but life has been something else and I figure better late than never, right?

You know, I really cut my fantasy teeth on Osten Ard, so the opportunity to go back there was something I wasn’t willing to pass over. I actually waited for this book with an amount of anticipation that would probably stun most of you guys. Tad Williams series, Memory, Sorrow, and Thorn, was everything to me.

This is a novella, clocking in at just over 200 pages, it’s a fast read, but it’s a powerful book. Williams wastes no time dancing around important issues, or spending long amounts of time on character introductions and the like. He just dives into the book feet first, and takes his readers along with him.

The pacing is flawless, and the plot is addicting. I do recommend you read Memory, Sorrow, and Thorn before you read this one. It’s not really a good place to start your introduction to the world. Seeing as how this one takes off right after the Big Huge War in his other series ends, most of what you read about won’t make sense unless you experienced the Big Huge War in the books themselves.

Readers will find themselves reintroduced to some of your favorite characters from his previous books, and there are some new ones added in as well. What really amazed me was just how well Williams managed to add the details of a land healing after such an incredible struggle. There are stories told, and observations, that show how no one really made it out unscathed. Everyone and everything is impacted somehow.

Relationships are also forming as people pick up the pieces from everything that has happened. Some of these are unexpected, and the war itself has left just about everyone with some emotional baggage that taints everything. Some people are trustworthy, some will give you that instant bugs-crawling-on-your-skin feeling. And there is still plenty of danger, some of which I anticipated, and some caught me off guard.

I could say a ton of things about this book, about the perfect pacing, the delight I felt at being back in a world that meant so damn much to me, and how this world was one of the cornerstones in my science fiction and fantasy obsession. I could say that this novella was the perfect length and I loved how Williams went in, pounded his readers with an addicting story, and then left them gaping, stunned, and wanting more. I could talk a bit about how he somehow managed to take a perfectly crafted world, and add more detail and depth to it in 200 pages, which I would have thought impossible if I hadn’t witnessed the feat myself. I could also go on and on about how perfect Williams is using his Memory, Sorrow, and Thorn series as a springboard to tell more stories that are sure to hook readers just as his other series did.

I could tell you all of that, and I could go on for days about how incredible this book was, and how everyone should stop everything they are doing right now and just read the damn thing, but I won’t.

Instead I will sum my diatribe up by saying that Tad Williams is one of the authors that started my love of reading, not just fantasy, but reading anything. Williams was one of those authors that made me love the written word, and truly appreciate the hell out of a story well told. He showed me what the art of creating and writing really was, and how a well-crafted story isn’t just engrossing and entertaining, but transformative. I am so very glad that he is back in Osten Ard. I loved everything about this book. I loved how short, sweet, and direct this novella was, without sacrificing any of the emotional gut-punch I associate with his books.

Perfection. Everything about this book was pure perfection.

So why don’t you do yourself a favor and just go read it.