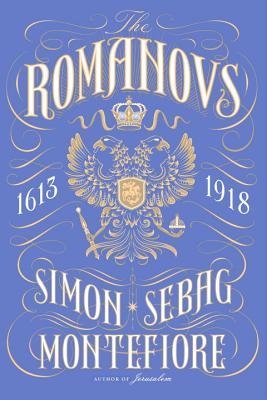 The Romanovs were the most successful dynasty of modern times, ruling a sixth of the world’s surface for three centuries. How did one family turn a war-ruined principality into the world’s greatest empire? And how did they lose it all?

This is the intimate story of twenty tsars and tsarinas, some touched by genius, some by madness, but all inspired by holy autocracy and imperial ambition. Simon Sebag Montefiore’s gripping chronicle reveals their secret world of unlimited power and ruthless empire-building, overshadowed by palace conspiracy, family rivalries, sexual decadence and wild extravagance, with a global cast of adventurers, courtesans, revolutionaries and poets, from Ivan the Terrible to Tolstoy and Pushkin, to Bismarck, Lincoln, Queen Victoria and Lenin.

I don’t honestly know much about the Romanovs beyond the fact that a bunch of dudes killed them, and one kid’s name was Anastasia. In all things Russian, I’m lacking. However, the saga of this royal dynasty intrigued me. They spanned hundreds of years. Some of them were completely bonkers, and some of them were incredibly influential, ruthless, and looking into the future.

I was very excited about this book by Simon Sebag Montefiore. It’s huge, weighing in at just shy of 750 pages and it covers three hundred years of Russian history, tons of wars, plenty of death (lots and lots and lots of very ruthless, impressive killing in this book), and plenty of people being sent to Siberia for one reason or another.

There really isn’t ever a dull moment here, and the one thing I love about Montefiore’s writing, is that this doesn’t read like some college textbook. He peppers his book full of wry comments, some offbeat humor, and a ton of footnotes with interesting factoids that had me saying, “YOU HAVE GOT TO BE KIDDING ME! Someone actually did that?!” at least a million times.

He spends a lot of time on the last of the Romanovs, but I was surprised to realize that the book wasn’t dominated by this story, and it wasn’t as focused on as I expected. He spent a ton of time on a few other Romanovs as well. There were a lot of very interesting stories in this book, about people that I’d honestly never heard of or thought much about.

I told my husband several times while I was reading that the truth is stranger than fiction, and it really is. I had no idea that one family could be full of so much carnage, vindictiveness, grand ideas, insight, progress, madness, poisonings, celebrations, lavish lifestyles. This was a group of people who ruled an absolutely sprawling country, tons of wars and fighting, was the cause of boatloads of bloodshed, and somehow managed to survive as a dynasty for three hundred years. It just boggles the mind.

Montefiore broke this book into Acts rather than chapters, and each act is headed by a family tree (which was very, very useful, and I referred to it a ton of times as I read) and a cast list. I thought it was very clever how he boiled down this sprawling family saga into acts complete with a list of players, because in many ways, this seems like a saga that is surreal, not real, beyond truth. I mean, it’s something you’d see on a stage, something that is so grand, so outrageous, so far beyond belief that the only place that it could actually be true is on a stage. And in a lot of ways, these Romanovs did turn their lives into a pageant.

The book moves along at the perfect pace, and I was actually completely surprised by how well Montefiore managed to give everyone the exact amount of space that they deserved and needed. No one felt like they were lingered on too long, and everyone got covered in some way. He did mostly focus on the Romanovs, so there is very little look at how the people of Russia were living aside from some mentions regarding how they lived, some of the issues they faced, but this was really a book about the Romanovs, and as their dynasty changed, it was kind of easy to see how the serfs would feel about some of this stuff that they saw their rulers and leaders doing.

This was my first foray into both Russian history, and a Montefiore book. I put two other books of his on hold at the library immediately after, because his writing impressed me that much. He managed to take a complex story that could have been incredibly dry, and boil it down into easily absorbed, interesting chunks that were easy this Russian noob to digest.

I cannot recommend this book enough. If you’re interested in Russian history, or you’re just interested in really creative ways of killing people for the book you’re writing (seriously, these dudes were brutal. I’m kind of impressed that they lasted as long as they did), then this might be something you should look into reading soon. It’s brilliant, weighty, and absolutely unforgettable.