NOTE: I wrote a glowing review of this book and then someone sent me this link, regarding a controversy I wasn’t aware of. This book may be complete fabricated crap, which really pisses me off, however, it’s already online so I figured I’d keep it there with the link and a note where my absolute indignation is hopefully clear. 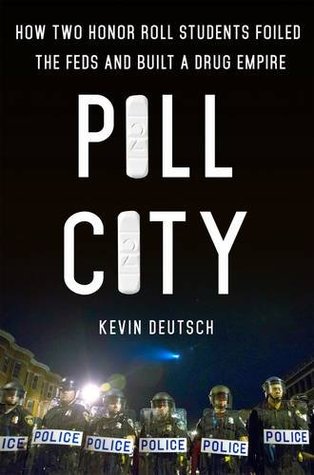 In this crime-plagued section of the city, the death of Freddie Gray has triggered the worst domestic rioting since the assassination of Martin Luther King Jr., and created a terrifying new breed of criminal entrepreneur.

Here, as looters and arsonists lay waste to already blighted parts of Baltimore, two of the city’s brightest students are helping to carry out a historic drug robbery spree–one that will flood the city with highly addictive pain pills and heroin.
The teens’ plan: to use their gang connections and computer programming skills to set up a high tech drug delivery service and Dark Web marketplace. The result: the boys became America’s youngest drug lords, in the process sparking bloody gang warfare and a nationwide wave of addiction and murder. Now mixing in deadly circles, Brick and Wax soon found their own lives were on the line…

In this groundbreaking work of investigative journalism, Newsday criminal justice reporter Kevin Deutsch chronicles the rise of these gangland upstarts as they help steal $100 million worth of high-powered opiates, and build a national narcotics empire from scratch.

As gripping and compulsive as a thriller, Pill City takes readers into the heat of the action as Brick and Wax outwit the FBI and DEA, gang members like Damage and Lyric live and die by their own brutal code, the cops battle to stop the carnage, and a high-school coach risks a bullet to get addicts into rehab.

A gritty, hard-hitting story of gangland survival, Pill City will open the world’s eyes to the plague of drug-related killings rocking America, and reveal the deadly cost of the Baltimore riots.

I don’t really know how to categorize Pill City. It’s a book that is part crime thriller, part social commentary, and incredibly interesting. In fact, this is the first, and only, audiobook I’ve ever listened to completely in one day. I was absolutely, amazingly gripped by the story being told. The whole thing was surreal, beyond reality.

In order to understand Pill City, you need to understand drug addiction and the opiate crisis in the United States. Peppered throughout this book is a ton of valuable information about opioids, why people love using them, how easily accessible they are, how they are used and prescribed (too much) by doctors. Understanding why people trade heroine for an oxy is important to the story. It’s the entire reason why Pill City became such a big deal.

Contrasted with that, you need to understand the vacuum with drug delivery systems, and just how these two impoverished Baltimore high school kids figured out how to fill this vacuum. Their filling-of-the-vacuum coincided perfectly with riots happening in Baltimore at that time, which they used to strip drug stores of their precious opioids, creating a massive storage of these drugs, to cell on the darkweb program they created, called Pill City (hence the title of the book).

These two kids, who were given aliases, completely transformed the drug trade in the United States, with far reaching implications that really boggled my mind. Told in a well written, gripping way, this story wrapped itself around me. Not only did I learn a lot about drugs, the drug trade, addiction, and other things that I never really anticipated learning about – like the orphans, the kids left behind by drug addicts.

Along with this story of two kids and their darkweb program Pill City, and how all of this dramatically impacted the drug abuse in Baltimore during this time period, we have a gang war/fight for territory, a police officer who is completely overwhelmed by the increase in drug problems, hospitals that are likewise overwhelmed by overdoses and so much more.

It’s a dark story, and occasionally a bloody one. There isn’t much light in this book, and the stories that are being told are raw and real, and the author really has a way with bringing all this darkness to life in a way that makes it not just gripping, but important. It’s important to know about this problem, about this specific story, because it literally has revolutionized the way drugs are being sold and traded in our society, probably on a global level by now.

So, Pill City. It’s a program dreamed up by two poor high school kids in an impoverished part of Baltimore. It was a way for them to make money, but they managed to perfectly pinpoint the time to launch this program. They became drug kingpins, and ruled the world for a time. No one could find them. No one knew who they were. They caused gang wars, a ton of death and blood was shed because of them, they fundamentally changed the way drugs were sold, and their availability in Baltimore. They became multi-millionaires.

And it was literally impossible for me to put this book down. I listened to the audiobook in a day (and it’s a superb performance) because I just couldn’t stop. It’s dark, but it’s real, and it’s raw, and it’s uncomfortable.

At the end of the book there is an author’s note about how he did the interviews, everything he had to do to contact these two men, and some of his contacts and how he used them, as well as how his experience as a crime writer helped him sift through the bits and pieces of this story so he could distill it into a digestible, important story for his readers.