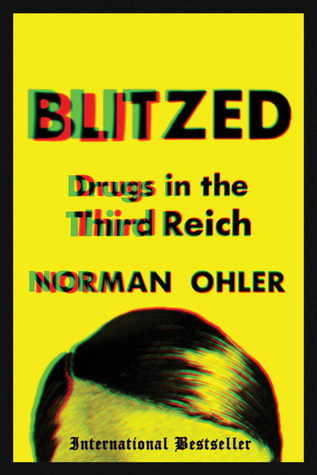 The Nazi regime preached an ideology of physical, mental, and moral purity. But as Norman Ohler reveals in this gripping new history, the Third Reich was saturated with drugs. On the eve of World War II, Germany was a pharmaceutical powerhouse, and companies such as Merck and Bayer cooked up cocaine, opiates, and, most of all, methamphetamines, to be consumed by everyone from factory workers to housewives to millions of German soldiers. In fact, troops regularly took rations of a form of crystal meth—the elevated energy and feelings of invincibility associated with the high even help to explain certain German military victories.

Drugs seeped all the way up to the Nazi high command and, especially, to Hitler himself. Over the course of the war, Hitler became increasingly dependent on injections of a cocktail of drugs—including a form of heroin—administered by his personal doctor. While drugs alone cannot explain the Nazis’ toxic racial theories or the events of World War II, Ohler’s investigation makes an overwhelming case that, if drugs are not taken into account, our understanding of the Third Reich is fundamentally incomplete.

Carefully researched and rivetingly readable, Blitzed throws surprising light on a history that, until now, has remained in the shadows.

Alright, so the rest of this week is going to be dedicated toward the last of my SPFBO books, but I just had to review this book this week because, really, how could I not? It was incredible.

Basically, I can sum up this book as follows: This book was absolutely perfect.

Blitzed is one of those books that really rocked in just about every possible way. There are a ton of books about World War II, and even more about Hitler, who was one of the most notorious historical figures in human history. He’s interesting to read about, and it’s also heartbreaking because of everything he did to so many people who didn’t deserve any of it.

Blitzed is book about Hitler, and about World War II, that is different from most other books on this subject. This book focuses directly on drugs, and how drugs impacted World War II.

There is a brief chapter at the start of the book which gives some historical context, Germany after World War I, and how and why these drugs were created by pharmacies, how the drug culture really began in Germany, and why these substances were so popular. It gives the perfect backdrop, and sets the stage with just enough depth and detail so readers will easily understand how and why methamphetamine, for example, was so popular among German soldiers.

After that chapter, the book delves into how methamphetamines were used amongst German soldiers, and how it impacted the Blitzkrieg. Basically, the Blitzkreig wouldn’t have been as successful as it was without the drugs used by the soldiers. He delves into how this stuff was made, how it was distributed, gives historical information, quotes from letters written by people at the time, in those battles, and so much more. It absolutely blew my mind to see just how this drug was used, and how pervasive it was at the time.

Now, the other side of me was reading all of this and realizing that, while this is all mind boggling, the people at the time really had no idea about negative side effects, and the negative impacts of using these drugs, though occasionally people would drop dead from heart attacks, the lines of cause and effect weren’t really drawn.

From drugs being used by soldiers, we move to Hitler, and his relationship with his personal physician, which is… wow. A lot of blanks were filled in regarding Hitler and how he changed throughout the war. Hitler’s physician kept him pumped full of roughly 80 different kinds of drugs, many of them impacted his mental facilities and his perception of reality, which became more and more obvious as the war progressed. Beyond that, the book delves a little bit into concentration camps, where some of the prisoners were forced to test these super drugs toward the end of the war.

The writing style was plain enough that these topics were easy to understand and absorb, and this book was absolutely captivating. I honestly couldn’t put it down. It’s not incredibly long, but it’s just about as long as it should be. The author makes a point in saying that this drug usage doesn’t excuse Hitler in the least, but rather makes the whole thing a bit more grotesque in my estimation. It’s hard to picture someone as lost in his own head as he was, but still ruthless enough to kill millions of innocents.

Blitzed is a book that has stuck with me, and filled in so many blanks in my mind regarding Hitler and World War II. So much more that I had known about, I now understand the “whys” behind. For example, Hitler’s Parkinson’s Disease. Just how the German troops managed to move across countries like France so incredibly quickly, and so much more. This book was a gigantic “ah ha” moment for me. I burned through it so quickly, and with good reason. There wasn’t one page in this novel that wasn’t interesting.

So, Blitzed is one of the best books I’ve read in a long, long time, and I don’t say that lightly. It’s grim, and macabre, but it’s also an important World War II story that should be told, by an author who seems like he was born to write this specific book.