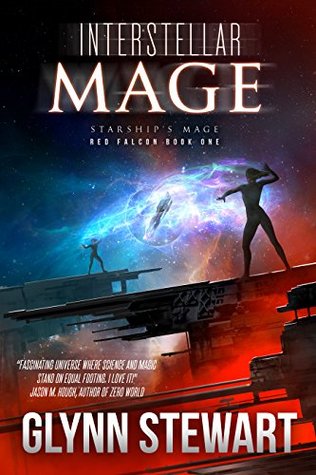 Writing managed to liberate Stewart from a bleak future as an accountant. With his personality and hope for a high-tech future intact, he now lives in Canada with his wife, his cats, and a portable cast of thousands for readers to meet in future books. You can learn more about Glynn Stewart at his website.

With NaNoWriMo around the corner, I get a lot of questions about how I write 70-100K words per month. Part of the reason I can write so much is that it’s my job: I target 5,000 words a day, which is about an eight hour workday most of the time.

My process involves breaking things up so that I have enough energy to reach my target by the end of the day: I write quicker at the end of the day than I do at the start. About half of my workday is actually spent writing. Basically, I write a scene (which takes about a half hour) and then I go do something else: get coffee, have lunch, pay attention to the cats, check Facebook, play video games… it doesn’t really matter as long as at the end of the hour I’m back to writing.

It’s definitely easier as time goes on and you learn how to hit your stride. I’ve been writing full-time for about two years, and this July I finally reached 100,000 words in a month. That’s not something I plan to do every month! But it feels great that I’m at a point where I can sustain this pace: I can write the books that I want to write, my wife and I can work on it full-time, and I think my craft is getting better for it. I’m very pleased with the Duchy of Terra space opera trilogy that I’ve been working on for the last year or so.

So if you’re writing part time, getting to the point where your writing is a habit is your biggest goal—although other goals like using NaNoWriMo to write 50,000 words in a month can definitely help. But it’s not the be all end all, not if you’re trying to grow writing into something that you do every day. When I was writing part-time, I was targeting 1,000 words a day as best as I could, which translated into somewhere between 500 and 1,000 words a day in practice (or about three novels per year.)

There will always be someone who writes faster than you do: I know people who write triple the amount of words that I do in a week, and I do pretty well. Hold to your own goals, build habits, and figure out what works for you.

Mars destroyed his ship — but gave him a new one.
Mars drafted his Mage — for the good of humanity!
He should have known that wouldn’t be the end of it…

Captain David Rice has a new ship, a new crew, and a new set of Jump Mages to carry him between the stars. All he wants is to haul cargo, make money and keep his head down.

His past, however, is not so willing to let him go. An old enemy is reaching out from beyond the grave to destroy any chance of peace or life for Captain Rice—and old friends are only making things more complicated!

All he wants is to be a businessman, but as the death toll mounts he must decide what is more important: his quiet life or the peace humanity has enjoyed for centuries…