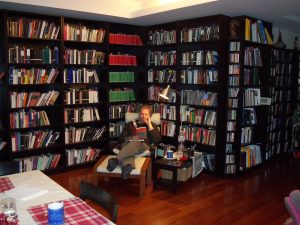 S.C. Flynn was born in a small town in South West Western Australia. He has lived in Europe for a long time; first the United Kingdom, then Italy and currently Ireland, the home of his ancestors. He still speaks English with an Australian accent, and fluent Italian.

He reads everything, revises his writing obsessively and plays jazz. His wife Claudia shares his passions and always encourages him.

S.C. Flynn has written for as long as he can remember and has worked seriously towards becoming a writer for many years.

The Hidden Face is his second novel and the first book in the Fifth Unmasking series.

The Hidden Face is set to publish on November 25. Check out the following links to purchase, or pre-order the book: Amazon, Kobo, Barnes and Noble, iTunes.

Today’s post is written by Sunniva, a female Faustian warrior and the daughter of a well-known scholar. Here is Sunniva as a child:

She often sat on a rug dreaming of battles and acting them out with her wooden soldiers. The Faustian foot soldier was her oldest toy; the point of his spear was broken and his armour was battered. Her favourite was the Magian warrior. His clothes and weapons were strange, and she used to lie awake at night thinking of the distant lands where he came from, imagining herself there having adventures. 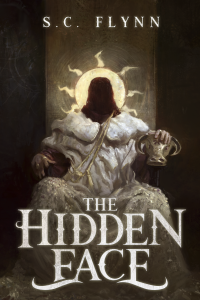 She got on well enough with her brothers and sisters and the children of the servants, but the best games were those on her own with the soldiers. The girls soon became bored of battles and tried to involve her in embroidery and such things, while the boys became rowdy and stupid and tried to boss her around just because she was a girl. She and the wooden soldiers had a wonderful time on their own; they were always brave and generous, whether they won or lost. Her father would watch her playing sometimes and smile.

This novel contains lots of nice flashbacks and character touches like that; the one above captures exactly what I was like as a little girl and indicates the woman I became. I like to think that my father would have been proud of me.

It is good to see a story that includes strong female characters like me and Malombra. My situation as a female warrior disguised as a man is unusual and I am pleased that the author has given plenty of space to my fighting ability. My knowledge is shown as important to the solving of the mysteries at the heart of the story. The use of some of my childhood fears is scary – but I do not want to spoil your enjoyment of the story by revealing too much!

I have to say that I am a little annoyed with the author about one thing. He evidently cannot stop thinking about Malombra and her legendary beauty that no one ever sees; I expect he fantasises about seeing beyond her veil and sharing her couch. In that way, he falls into her trap, as have so many other men.

There is too much sex and nudity (both male and female) for my taste, although I am not ashamed of being shown like that. Overall, I cannot really complain about how the novel represents me, and it was fun accompanying Dayraven on this adventure!