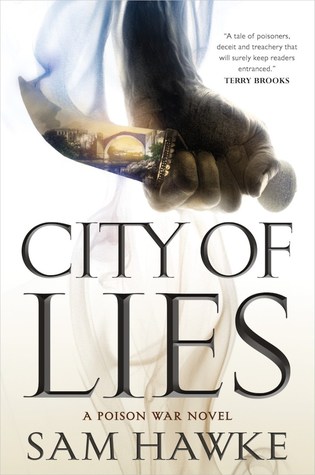 Outwardly, Jovan is the lifelong friend of the Chancellor’s charming, irresponsible Heir. Quiet. Forgettable. In secret, he’s a master of poisons and chemicals, trained to protect the Chancellor’s family from treachery. When the Chancellor succumbs to an unknown poison and an army lays siege to the city, Jovan and his sister Kalina must protect the Heir and save their city-state.

But treachery lurks in every corner, and the ancient spirits of the land are rising…and angry.

City of Lies is one of those books that had me from the get-go. First, there’s a blurb by Robin Hobb on the back cover. Secondly, the first line of the book is basically a lesson in how authors hook readers fast.

Still, I went into this a bit skeptically. I tend to always be a little reluctant about books that are getting a ton of praise, regardless of blurbs, or first lines or anything else. There’s a lot of room in a book this long for things to take a turn that is less than pleasing.

Anyway, City of Lies was instantly addictive. It took me a little while to warm up to it. The first few chapters were great, but I didn’t really feel that “must continue reading” urge until I was about 100 pages into it. Not for any huge reason. I can’t even blame a slow start because things pretty much start moving at lightning speed from the first few pages, on. I think those hundred pages probably reflects how long it took me to get used to the city, the government system, the lingo, and the characters themselves.

Now, this isn’t one of those books that wastes a lot of time with nothing happening but development. City of Lies, like I said, gets going just about instantly. It starts with that awesome hook, and then after a few pages, people start dying, and after that, the city is besieged.

The story is told from two points of view, a brother and a sister. Jovan works as master of poisons, testing all the food and beverages brought to his best friend, the heir. This role of his is secret. His façade, the affable, friendly but forgettable friend of the heir is how most people know him. It takes almost no time for readers to realize that Jovan sees just about everything and is quick on his feet. His loyalty and love for his best friend, and his sister, is obvious and sometime sit can cloud his perspective, but I think that’s part of caring about people, and loyalty in general, and that just made him more realistic to me.

Kalina is, hands down, my favorite character. She’s Jovan’s older sister. After a failed poisoning when she was a child, her role as master of poisons went to her little brother, Jovan, and she was left with a myriad of health issues that she struggles with throughout the book. I loved, loved, loved that about her. Despite her health, her uncle taught her to be useful within her limitations, and she’s an excellent spy, and very good at ferreting out information. She’s instrumental in figuring out what is going on. Furthermore, as someone who feels a lot of her symptoms in my daily life, I was really impressed with how realistically she was crafted, and small details like her joints aching like the devil when it rains, were sprinkled in her narrative liberally, and it was just awesome.

More than that, though, it really was cool to see a character who deals with a lot of physical ailments be awesome anyway. There isn’t enough of that in books, and when I see that sort of representation, and when it is done so well, I get really excited.

So, Kalina was awesome. She was a powerhouse of a character and had a very nuanced voice due to her personal experiences being so different than her brother’s. She saw things he didn’t and understood things in unique ways, and expressed frustration at her limitations (along with an acceptance of them), and frustration with people who didn’t understand her capabilities (as well as an understanding of how to use that to her advantage). Ultimately, the two perspectives balanced each other out well and worked in tandem to explore the drama of what is going on, on multiple levels. This allowed the story to unfold in a way that left me feeling like no stone was left unturned.

The drama, the besieged city sort of surprised me. I mean, I know that’s part of the back-cover blurb, but it happened so fast in the book that I was just kind of shocked. There was no wasted time between the first line, and the siege itself, and part of that lack of a buildup is what makes the whole central drama so incredibly compelling and real. Now, the siege wasn’t your typical siege, and due to how it’s undertaken, it takes most of the book to figure out who is attacking, and why.

I really enjoyed that. This is probably the first book I’ve read where there is this huge military event, and no one really knows who is doing it or why until close to the end. So much time is spent investigating the political situation that has been inherited by all of these primary characters. It’s quite a clever twist on your typical who-done-it mystery, and all of the treachery and double-dealing is really woven in gracefully, lots of it taking me by surprise as things gathered steam toward the ending.

The answers aren’t what I expected, either, and the way they are uncovered and slowly rolled out is really done quite well. I never felt like I was left hanging, but I did feel incredibly sucked in and I loved all the “ah ha” moments I felt when things slid into place and all these details that had been peppered throughout the book suddenly clicked together and made perfect sense. The duel first-person POVs were instrumental in that, as I experienced this book through the eyes of Kalina and Jovan, events mattered more to me. They were so very alive and real.

There are twists and turns along the way. The ending took me by surprise, though some of the answers to various riddles was a tad predictable. As all things must, this book ended, and now I’m personally offended (not really) that book two isn’t ready for me to read like RIGHT NOW, DAMN IT.

Ultimately, City of Lies lives up to its hype. The writing is fantastic, the world building is wonderful, and the characters were so intricately crafted they leaped off the page. The answers that you’ll be seeking as you read this book aren’t what you expect, but that’s part of the genius of the author, I’m learning. This book could have so easily been mundane, typical, predictable, and generally rather “meh.” Instead, Hawke took her story, and made it her own creature, and wow, what a creature it is. She gave City of Lies wings.

I am hungry for book two.