The Song of Achilles – Madeline Miller 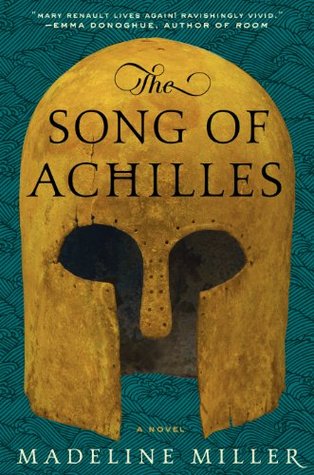 Greece in the age of heroes. Patroclus, an awkward young prince, has been exiled to the court of King Peleus and his perfect son Achilles. Despite their difference, Achilles befriends the shamed prince, and as they grow into young men skilled in the arts of war and medicine, their bond blossoms into something deeper – despite the displeasure of Achilles’ mother Thetis, a cruel sea goddess.

But when word comes that Helen of Sparta has been kidnapped, Achilles must go to war in distant Troy and fulfill his destiny. Torn between love and fear for his friend, Patroclus goes with him, little knowing that the years that follow will test everything they hold dear.

I decided to get The Song of Achilles due to how much I loved Circe, by the same author. I loved her writing, and I knew I just had to read the rest of her books. As it turns out, this one was highly recommended.

The Song of Achilles tells the story of Petroclus, an awkward boy who ends up getting exiled from his family due to a tragic accident. Petroclus leads an interesting life. Gawky and awkward, his father, a king who has high aspirations, takes his young son to another kingdom, Helen’s, as it happens, to put him forward as a suitor. This ends up binding him to Helen’s defense when events rise up later in the book. This is sort of the foundation for the infamous Battle of Troy.

Fast-forward a few years, and Petroclus is a young, gawky, exiled boy living in a foreign kingdom. He’s got no family, no friends, and no real skill at anything that the other boys enjoy, like throwing spears. He’s out of place, and miserable. He meets another young boy, Achilles, who is just as awkward and out of place, albeit for different reasons.

Achilles is the son of a mortal king, and the goddess he ultimately raped. Due to this, he’s beautiful, and good at just about everything. He has boys vying for his attention, but they all seem below his notice. He’s also been prophesied to be the best fighter in his generation. Slowly, Miller paints him to be just as awkward, and just as outside of the norm as Petroclus, though in a very different way.

Things happen, and these two gawky young boys meet up. Their friendship is slow to develop and stutters along a bit in a natural way. They grow up together, and develop and bond and loyalty, and a deep friendship. When they get into their teenage years, the boys have grown close, their friendship goes deep. Their awareness is changing, and so are their lives. The world is getting a bit bigger, and their roles in it are likewise shifting. Achilles, as a prince, has certain obligations, and Petroclus, as his companion, is always there with him.

Their romantic relationship develops slowly, and it isn’t until the middle of the book where any real romantic interest is established. It’s not graphic, but the relationship has been so well developed, and so realistically, emotionally crafted, that it feels so very real. Miller has a way of playing on all of my emotions, drawing them out, and making the book so much more absorbing and powerful due to how incredibly engaged I was.

The mixture of fantasy and reality, myth and history were quite well done. It’s obvious that Miller knows her topic. The perspective of Petroclus was wise, rather than Achilles. He is so very human compared to his partner. His emotions are raw and vivid, and their journey together is so very real and gripping that the events they both go through are like a punch in the gut.

I love it when books impact me so much they make me cry. This book is a beautiful tragedy, and I was wiping away tears quite a few times throughout the novel. To be honest, the ending just about ruined me, but that should tell you something about just how powerful this story really is. Flawless writing, a shockingly real protagonist, and emotions that were drawn so well, I felt them keenly.

The Song of Achilles ruined me in the best possible way. When I read a book, I don’t want to feel like I’m reading a book. I want to feel like I’m living that story, and this book accomplished that in spades. This is one of those books I might not have read unless it was recommended to me, but I’m so very glad I did. It’s transformative, a true odyssey, and it changed me.