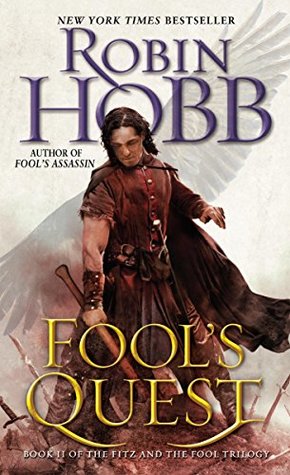 Acclaimed and bestselling author Robin Hobb continues her Fitz and the Fool trilogy with this second entry, following Fool’s Assassin, ramping up the tension and the intrigue as disaster continues to strike at Fitz’s life and heart.

After nearly killing his oldest friend, the Fool, and finding his daughter stolen away by those who were once targeting the Fool, FitzChivarly Farseer is out for blood. And who better to wreak havoc than a highly trained and deadly former royal assassin? Fitz might have let his skills go fallow over his years of peace, but such things, once learned, are not so easily forgotten. And nothing is more dangerous than a man who has nothing left to lose.

This was a library loan. Yay libraries.

This book had me in and out of tears the entire time I was listening to it. First, the narrator is absolutely out of this world amazing. If you listen to books, I highly, highly recommend you listen to these. He so smoothly tells the story that he gets me into the mindspace of Fitz, and Bee so I’m not just reading about what’s happening, but actually experiencing it.

Now, this book takes off right where the first one ends. You absolutely need to read Fool’s Assassin before you jump into Fool’s Quest. If you haven’t read it yet, I suggest you stop reading this review. I try to avoid spoilers, but it’s hard, and a few light ones might unavoidably drop.

In my estimation, one of the ways to tell that Hobb is such an incredible author is how she can take so much waiting, and make it interesting. I mean, vast swaths of this book are full of people waiting for something to happen that allows some forward momentum. Fitz is waiting, the Fool is waiting, Bee is traveling and sort of waiting for something to happen, and despite all of this, I was just fascinated and absolutely gripped by the story being told.

And despite all of that waiting, the intensity was through the roof. Yes, it’s a ton of downtime, a ton of the pause between events, but there is so much happening on so many personal levels, I couldn’t pull myself away. Fitz is dealing with losing his daughter, guilt as a father, learning about Chade’s secrets, adjusting to court life now that he’s back in Buckkeep. The Fool is healing. He’s still ill, still not who he used to be, but he’s growing into himself and it takes time. Chade is changing, becoming the old man that he actually is. Bee is moving across the land with strangers, waiting to see what happens next, becoming who she is meant to be.

This book, in my estimation, is ultimately one of transition. Everyone is changing, and everything is shifting.

There is a whole lot of very heavy emotions in this book, and that’s why I found myself wiping away tears and saying, “No, I’m not crying, it’s just allergies” at work a whole lot. The thing is, this isn’t an easy situation, and there’s a lot of time for Fitz to sit and stew, and he’s really in the center of a ton of change, some good, some bad. Hobb’s ability to really get into his mind, and the narrator’s ability to bring that to life, really had me feeling what Fitz felt, when he felt it, as acutely as he felt it. I was honestly amazed by how emotionally eviscerated this book left me. It flayed me, but in the best possible way. There’s a real skill when an author can get me this emotionally engaged.

So, there’s lots of waiting, and lots of emotional intensity. Things happen, however, and a lot of it is tragic. Yeah, there are some good parts, but by and large, this book is dark and weighty. There’s a lot of very heavy events that get explored, like what happened at Withywoods, for example. There are unkind, brutal people, and while Hobb’s graceful, lyrical prose effortlessly bring every tiny detail of this world and these events to life, she doesn’t shy away from discussing some of the brutality that is faced, in ways that really sent echoes through me.

Fool’s Quest is… wow. This book ripped me apart. I knew it would. I went into it expecting to leave it feeling emotionally eviscerated, but I don’t think I expected to feel this undone, and this satisfied by being this undone. There’s so much, and so little that happens at the same time, and it’s all so damn interesting in only the way Hobb can make things interesting, I was just floored by it. The fact remains, only Robin Hobb can make me ache in this way, and leave me begging for more.

So here I am, begging for more. I want Hobb to hurt me again. I want her to make me cry. I want it all. I want to read another one of her books for the first time, and walk away from it feeling all shaky-legged and soggy-souled, all used and eviscerated. Dark. I want to experience that suction cup feeling where I’m slowly pulling myself out of Fitz’s world, unsticking myself from it, re-entering my own reality, which never seems quite as shiny and detailed as hers.

But by damn, I absolutely never want it to end. Ever. There’s one book left, and it might take an act of god to get me to read it.

And this, friends, is the trials a bookworm face.