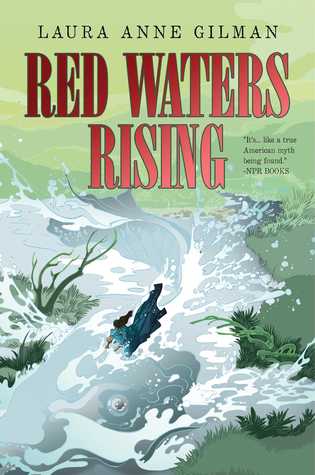 In the last novel of The Devil’s West trilogy, Isobel, the Devil’s Left Hand, and Gabriel ride through the magical land of the Territory to root out evil by the way of mad magicians, ghosts, and twisted animal spirits.

As Isobel and Gabriel travel to the southern edge of the Territory, they arrive in the free city of Red Stick. Tensions are running high as the homesteading population grows, crowding the native lands, and suspicions rise across the river from an American fort.

But there is a sickness running through Red Stick and Isobel begins to find her authority challenged. She’ll be abandoned, betrayed, and forced to stand her ground as the Devil’s left hand in this thrilling conclusion to The Devil’s West Trilogy.

This was a library loan. Yay libraries!

Red Waters Rising is the final book in the Devil’s West trilogy. Before you read this book, you need to read the others in the series.

I love this series. Every book has just done it for me. The first book knocked it out of the park, the second just solidified my belief in the fact that Gilman has found her true calling as an author and my brain and eyes are just thrilled with that career path of hers. This third book was one I was almost reluctant to start reading. I have a weird thing – when I really like a series, I never want it to end, so it almost takes an act of god for me to read that final book. However, it came in at the library and I decided it was time to put on my adult pants and finish this trilogy I’ve loved so much.

One of the things that amazes me about these books is just how much Gilman packs into 350ish pages. The books aren’t long. They aren’t doorstoppers. They aren’t something you’ll need to get your spine fixed after you lug it around. They are normal sized books, but there’s an epic level of content in them.

Now, throughout these books, Isobel and Gabriel have been traveling around this alternative “weird” west that Gilman has crafted. It’s a west full of magic, and interesting geology, folklore, myth, and plenty of mystery. People are as rough as the land they live on, and Isobel, a young woman working as the Devil’s hand, spends her days traveling across the west with Gabriel, her mentor and traveling companion.

Perhaps one of the best things about this book, which was also bittersweet, was the relationship between Gabriel and Isobel, and how it has transformed over time. Gabriel and Isobel hooked up in the first book, under the impression that Gabriel would teach her how to travel through the west, and do her job. In this third book, their relationship hits its final evolution, and while I knew it had to happen, it was a sad parting of the ways.

Isobel has grown a lot throughout the series, from a young, uncertain girl to a woman who knows who she is, and what she’s capable of. I enjoyed seeing how she’s evolved throughout the books, and the woman she’s turned into in this Red Waters Rising. In this book, Isobel is pushed in some unexpected ways, and seeing how she reacts to these situations is interesting, but it’s also really satisfying to see how she’s learned her role, and how to stand on her own two feet and reason her way through just about anything thrown in her path.

Events move along quite quickly in this book, which they have to with the length it is. As with previous books, one thing sort of rolls the ball along into another thing and then another until you reach the culminating events that make this book what it is. There’s always something happen, whether on a bit, loud level, or on a quiet personal level. Consider this book the butterfly coming out of its chrysalis. The process is interesting, intricate on every level, and the final result is beautiful, if a bit open ended.

Perhaps, if I had some small niggles with this book, it’s the fact that some obvious questions could have been asked early on that seemed to be avoided by both characters. These questions would have given answers that would have been instrumental in the events that transpired. There were a few big reveals that weren’t that surprising to me, and the ending was rather open. Some threads were tied off nicely, but Gilman left enough open so she could easily return to this world and the characters who inhabit it.

Red Waters Rising was a fantastic ending to a trilogy that I’ve loved. This series shows Gilman as her best. She’s a strong author, with a unique vision, and an incredible ability to not just craft a world but to make it so real I feel like I’m living in it. She took the West and made it not just wild, but magical and mysterious. Emotional, captivating, and absolutely addicting, Red Waters Rising was a solid ending to a trilogy that has been one of my recent favorites.

If you’re in the mood for something a bit different, but just as fantastic as any fantasy you’ll ever read, you really need to check out The Devil’s West series. Rich with historical detail, riveting plots, excellent writing, and intricately crafted characters, you really can’t do better than this. It’s different than anything else you’ll find on the shelves right now, and all those things that make it different are also all the things that make it so damn good.

So, the long and the short of it is, read this trilogy, and read it now. You’ll be glad you did.