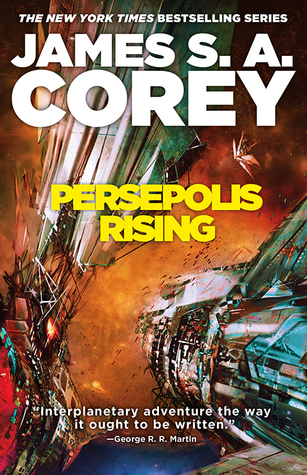 In the thousand-sun network of humanity’s expansion, new colony worlds are struggling to find their way. Every new planet lives on a knife edge between collapse and wonder, and the crew of the aging gunship Rocinante have their hands more than full keeping the fragile peace.

In the vast space between Earth and Jupiter, the inner planets and belt have formed a tentative and uncertain alliance still haunted by a history of wars and prejudices. On the lost colony world of Laconia, a hidden enemy has a new vision for all of humanity and the power to enforce it.

New technologies clash with old as the history of human conflict returns to its ancient patterns of war and subjugation. But human nature is not the only enemy, and the forces being unleashed have their own price. A price that will change the shape of humanity — and of the Rocinante — unexpectedly and forever…

I will admit to you, dear reader, that I was really, really reluctant to read Percepolis Rising. It’s set 30 years in the future, and I just… I wasn’t sure how that would translate to the overall plot. So, let me put that to bed before I say anything else about the book. Do not let the 30-year gap between the last book and this one bother you. In my estimation, it was necessary, and after a very “meh” previous book, Persepolis Rising felt reinvigorated and rejuvenated. It needed that 30 years. Trust me.

I have to admit that coming back to these books is always like going home. They are so much fun, and the characters, after so many books, have become part of me. I still think Amos and Avasalara need to be stuck on a ship together, hurtling through space because dear god that would be the best book I’ve ever read, but aside from that, this series has never really let me down.

Persepolis Rising, as I said above, starts 30 years into the future, and this gives the entire book a really interesting dynamic. After the previous to-do’s, the solar system has had time to stabilize. Governmental systems have had a chance to evolve and change into their current incarnation. The ring gates are important, and the people who control them weld a massive amount of power. Some of the colonized planets are becoming forces of their own, and there’s a pull-and-tug of power between the established system, and those colonized planets.

Now, aside from that, there’s been 30 years for James and crew to establish themselves in the solar system, to do what they do best and just really exist. Now they are 30 years older, and wiser, and thinking about retirement and all that fun stuff. They aren’t part of the young crowd anymore, but tried and true. James and crew find themselves in another situation, which, as these things do, evolves into something bigger than he is. As this is happening, a ship from a lost colony suddenly appears. They have advanced technology and a very threatening play for power.

Persepolis Rising is really the book that breathes fresh life into a series that I’ve always loved but was starting to turn a little stale around the edges, in my humble opinion. This book is the start of a new phase of things, and nothing was really what I expected it to be. The gap of years was absolutely necessary for these events to take place. The older, wiser characters had more knowledge and insight, less cocksure and more willing to navigate tricky events with intelligence. The interplay of power, dynamics of influence and the struggle between the ruling class and its impact on those being ruled was absolutely fantastic.

This isn’t just our solar system anymore, but a ton of solar systems, and thousands of populated planets, with a diverse set of cultural norms and visions for the future. It’s a fractious group that is just made more so by the events that take place in this book. A lot of questions are posed to readers, a lot of tense situations are explored, but there aren’t really any firm answers yet. I loved that.

But what I probably loved the most was that Holden and crew aren’t really the ones holding the best hand. They’re just as uncertain as everyone else, and events don’t play out in a way I expected them to. I will say I’ve gotten kind of used to there being some epic struggle and then Holden & co ultimately ride off with more questions to answer, but the situation at hand handled and nicely packaged behind them. This isn’t that. The end of this book is much more uncertain. The questions that are unanswered are far more numerous than the questions that are answered, and the general tone was a lot darker than I expected.

This is, hands down, my favorite Expanse novel. Persepolis Rising was everything I ever wanted (except for Amos and Avasalara being stuck on a ship together because, seriously people, that would be some of the best dialogue in the history of the universe, thank you very much.). This book was darker, more intricate, the obvious start of something grand, with an uncertain ending that I just absolutely loved.

Persepolis Rising was an absolute homerun. I honestly cannot wait to see what happens next.