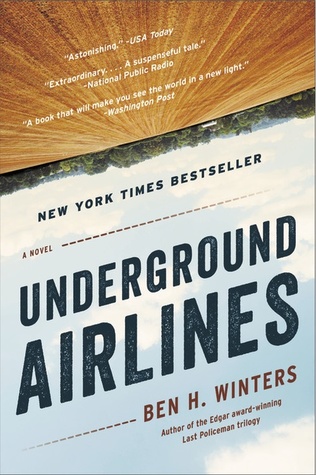 A young black man calling himself Victor has struck a bargain with federal law enforcement, working as a bounty hunter for the US Marshall Service in exchange for his freedom. He’s got plenty of work. In this version of America, slavery continues in four states called “the Hard Four.” On the trail of a runaway known as Jackdaw, Victor arrives in Indianapolis knowing that something isn’t right–with the case file, with his work, and with the country itself.

As he works to infiltrate the local cell of a abolitionist movement called the Underground Airlines, tracking Jackdaw through the back rooms of churches, empty parking garages, hotels, and medical offices, Victor believes he’s hot on the trail. But his strange, increasingly uncanny pursuit is complicated by a boss who won’t reveal the extraordinary stakes of Jackdaw’s case, as well as by a heartbreaking young woman and her child–who may be Victor’s salvation.

Victor believes himself to be a good man doing bad work, unwilling to give up the freedom he has worked so hard to earn. But in pursuing Jackdaw, Victor discovers secrets at the core of the country’s arrangement with the Hard Four, secrets the government will preserve at any cost.

Underground Airlines is a ground-breaking novel, a wickedly imaginative thriller, and a story of an America that is more like our own than we’d like to believe.

I was lucky enough to come across an audio copy of Underground Airlines on my library’s website. Now, before I say anything, let me say that William DeMeritt is a new narrator to me, but I honestly can’t think of a person better suited to reading this book. He really made the protagonist come to life and had a smooth and effortless way of slipping in and out of roles, which is necessary for the book. So, I highly recommend this audiobook.

This is my first book written by Ben H. Winters, though I understand that he has some other books out that reviewers I really respect have absolutely loved. Underground Airlines was different than I expected it to be. In its core, most base state, this is a thriller/mystery. There’s a lot of questions asked, a lot of answers gradually given, and a constant tension that underscores almost every situation, and only gets thicker as the book progresses.

But really, this book is a hell of a lot more than that.

Underground Airlines throws readers into an America where the Civil War never happened. There are four states where slavery is legal, and still practiced. Our protagonist, Victor (though he goes by plenty of other names), is a freed slave, though he really isn’t free. He has handlers, who send him out to track down escaped slaves and bring them back to their masters. He has a chip in the base of his skull that tracks all of his biological functions and his location. He isn’t really free, and he knows this, he carries that knowledge with him everywhere. He likes what he does because he’s good at it, but he doesn’t like doing it, if that makes sense.

Victor is sent on the hunt for an escaped slave named Jackdaw, but he quickly discovers that things aren’t what they seem. In Indianapolis, he gets a messy file on this slave, that leaves him with more questions than answers, discovers a Catholic priest, and an overly friendly cop, as well as a white woman with a mixed-race son, who has her own reasons for becoming invested in what is transpiring. Soon, plots evolve around plots, and Victor finds himself neck deep in a situation that is far bigger than anything he expected.

I don’t really want to say more about the plot, because I don’t want to give anything away, so I’ll change tracks here.

Underground Airlines is powerful. This book was a punch in my gut and it made me realize how fragile history is. Some of these issues seem extreme, but they really aren’t. They might be more extreme in this setting, but that makes sense considering the book itself. However, so many of the problems faced in this book still exist in our own world in one form or another, and Underground Airlines made me think about that, made me examine racism, race, and history completely differently.

The story Underground Airlines tells is gripping and intense. There’s always something happening, and there are a lot of twists and turns, a lot of depth added to characters, and a lot of mirrors reflecting ourselves. It’s not comfortable, but it isn’t meant to be. From the first page to the last, this book grabbed me. It’s one of those books that is almost overwhelming due to all its good qualities. The writing is superb and powerful. There were more than a few occasions where I had to stop listening and write down this brilliant line before I forgot it. The plot doesn’t quit, and the setting, a world so similar to ours, but just different enough to make an impact really floored me.

Underground Airlines is a book that moved me. I expected it to make an impact, but I didn’t expect to be this impacted.