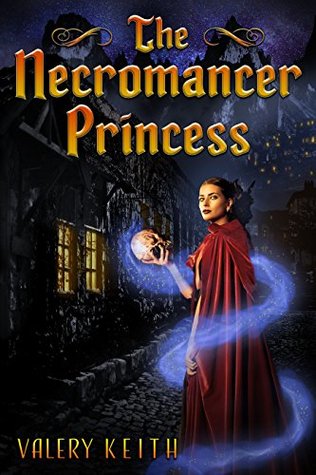 Exiled from her birthright as a child, Brianna’s only crime was to be born a necromancer in a world that mandates their execution. Rather than have his only child executed, her father, the King of Belmontis, entrusts his closest friend with her care and sends her away before claiming her death from illness.

Twenty years later, her father has been assassinated by her cousin, who now holds the throne, while Brianna is living anonymously in the Warrens of Mountainvale, the city’s worst, most dangerous slums. Though she is unaware of the gathering threat beyond the borders of the country she might have ruled, a foreign necromancer is gathering his army to invade, starting with the city she now calls home. Having already taken a neighboring nation in just weeks, they have set their sights on wealthy Belmontis and only another necromancer can stop them.

When Garrett Morris, Mountainvale’s City Commander, receives a royal command to arrest the necromancer hiding in his city and hold her until the King’s representative can arrive, he’s shocked to think such a foul creature might be lurking in his city. Only when his men finally bring her in, she’s nothing like he imagined a necromancer would be. Instead of the mad hag he expected, she’s young, beautiful, sarcastic and determined to escape his custody, one way or another

The Necromancer Princess is an interesting book. The fact that this book focuses on a woman who is a necromancer instantly interested me. It’s not that often that necromancy features in a book, and absolutely never like this.

So huge bonus right there.

Brianna was born a necromancer in a world where that isn’t a thing that is allowed. Children born this way are usually killed as soon as they are discovered. Instead, her father hides her away, and she grows up an orphan, making her way through life in a really dirty, dingy city with no idea that she is the daughter of a very powerful, very influential man. Anyway, fast-forward, and we meet Briana as an adult. Essentially, there’s a power struggle of sorts, and only another necromancer can really put a stop to it, so Briana is found, and things get interesting.

I was ready to read a book that was hugely focused on politics and intrigue, and while that does play a big role in the story being told, it really wasn’t the heart and soul of the book. The politics sat on a back burner compared to the other things that were going on. I will elaborate, but let me say that this point right here will probably be the make it or break it for you regarding this book.

Now, back to the other things this book focused on.

Really, in my humble opinion, this book is more about relationships than it is about politics and intrigue. It’s a romantic fantasy book, and I felt like the romance aspect sort of dominated all the other parts of the book. The romance was pretty natural, developed fast and was predictable, but it was warm and if you’re a fan of romance, you’ll probably love this book.

Briana is a strong woman. She really dominated this book in just about every respect. Other characters were varying levels of well developed (though most secondary characters were paper thin), but Briana was really where the author seemed to focus most of her attention and effort. She’s headstrong to the point of being unbelievable at times, but she is a character who tells a compelling story, and her unique history gives the events taking place the sort of zing that it needs to grip readers.

The plot meanders and wanders at points. There were occasions in this book where I wondered if the author had decided which she wanted to write – politics or romance. There’s no reason a book can’t be both, but these two elements didn’t really seem to share the stage well in this story, and it made the book feel kind of uncertain. Some parts of the plot lagged, and others could have been extrapolated on a bit, but by and large, this book is fun. It’s not overly deep, and it’s easy to read with an interesting world and a plot that doesn’t really make you work for it. It’s the kind of book you’d probably want to read on a rainy day.

The writing was solid. The author obviously has a style that she’s carved out for herself, and it works. Like I said above, this book doesn’t make you work for it, and sometimes that just exactly what a reader needs. Her writing is smooth and brings the world and the emotional angst, and atmosphere to life.

The Necromancer Princess, in the end, wasn’t really my bag of rice, but that’s okay. It’s a solid story told by a talented author with characters that are interesting enough to keep my attention. It’s not perfect, but it doesn’t really need to be for it to be enjoyable and worth your time. Some books are like a soft blanket on a cold day, and I’d absolutely put this book in that category.