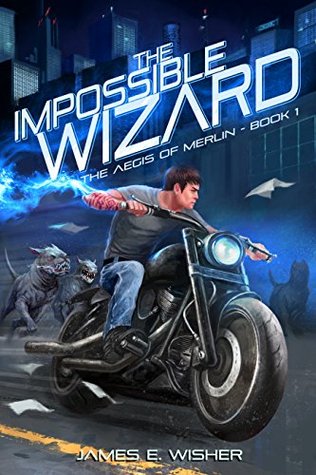 Everyone knew it was impossible for men to do magic, until it happened.

Conryu Koda in a young man of modest ambition. All he wants is to work on bikes and practice Kung Fu. His modest dreams die on the day of The Testing when it’s revealed he has wizard potential.

When the Department of Magic announces that a male wizard has been found it draws the attention of the Le Fay Society, a radical group of wizards that view men as little better than animals and Conryu as an abomination. The Society will stop at nothing to see Conryu dead.

The Impossible Wizard is the first book in the Aegis of Merlin urban fantasy series.

The Impossible Wizard is one of those books that I wanted to like a lot more than I ended up liking it. Sorry, I guess that’s a review spoiler, but that’s the truth of it.

This book tells the story of the first male wizard, in a world where male wizards don’t exist. One Conryu is a man born into this world with magic. This makes him not only unique and prized but sort of a fish out of water. The setup is pretty awesome, and I was really excited to read more about this impossible wizard and his life as a male magic user in a world where that isn’t a thing.

The problem is, this book really isn’t about our impossible wizard, despite the title. The book is essentially a who-done-it investigation with magic thrown in, and Conryu, who I thought would be the protagonist, ended up a two-dimensional secondary character, at best.

So, we’ve got a murder investigation, and all sorts of shenanigans taking place, and I just… wasn’t enjoying it, for several reasons.

First, the world building was lacking. This is set on an alternate earth, and I assume it’s set in a Japanese-esque place because it’s called the Empire of the Rising Sun, and everyone has to wear kimonos and do martial arts. That’s fine, but it just felt very, very cliché, like this complex, incredible culture just boiled down to bullet points despite a mixture of cultural influences. I don’t mind nonwestern cultures in books, in fact, I totally support them and actively search them out, and the distinct lack of white people was a HUGE plus on this front, but the way this culture was created and used was a little too simplistic.

More than that, though, is the fact that there are all sorts of other beings in this book, from elves to demons to wizards, and just about everything else, but we’re never really given an insight as to where these elves and angels and etc. live or come from, how they fit into this society, how they make sense in the greater tapestry of the book. They just kind of were inserted into the plot and left there, and I did feel that they could have been used more effectively, both in world building, and better development would have aided the story quite a bit. The thing is, there is a discussion about demons coming from other planes, but I was never sure if that counted for elves and angels as well, and honestly, I would have liked to know more about that because it adds another layer to the worldbuilding that I’d have really enjoyed.

My biggest bugaboo, however, was the lack of common sense, and I mean that throughout the entire book, on numerous levels, but especially when the investigation started going on. People were doing things and making assumptions that made absolutely no logical sense. This had the impact of making things feel like they dragged on too long, which, in turn, made the plot feel meandering, and longer than it needed to be.

The antagonist, quite frankly, felt like he could have dropped out of a comic book, complete with evil laughter and the mysterious cape and mask. And on this point, just about everyone, including our antagonist, got more stage time than the impossible wizard the book is named for.

And I pick on all of these things, and I realize that by doing this I’m crushing someone, but the thing is, the author has some real skill. The world is unique, the idea is solid, and the writing damn near leaps off the page. The ability is there, but I felt like it wasn’t executed well, and the end product didn’t live up to the quality of the authors very real talent.

On the plus side, this is a pretty lighthearted book. Conryu never really wallows or drowns in angst. He’s worked hard for what he’s got and makes sure that he does the right thing even in hard situations. He’s a man who has had to fight for who and what he is in a world that, at times, seems set against him, and that’s really made him an interesting light in the novel. There’s a lot of action and adventure, a lot of pulse-pounding scenes, and if you enjoy martial arts, you’ll really enjoy this book, as there’s lots of it here.

Essentially, this book felt like a novilized form of a comic book, or maybe anime, and maybe that’s your thing. If it is, I heartily recommend you pick this book up because you’ll probably love it. That sort of thing isn’t my bag at all, and ultimately ends up annoying me, as you can probably tell here. This could be a prime case of right book, wrong reader, so keep that in mind before you sail past reading this one.

So, The Impossible Wizard didn’t do it for me, but it might do it for you, so give it a try.