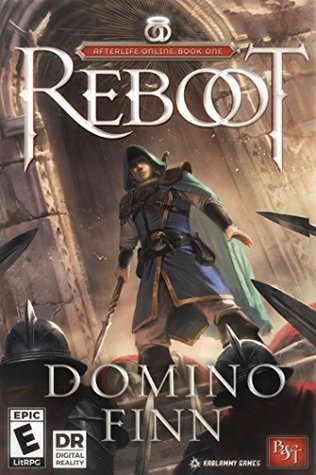 Tad Lonnerman is having a crappy day stuck in crappy traffic late to a crappy meeting. On the bright side, his game development career is the only non-crappy thing he has going for him, so life isn’t all bad.

At least until he dies.

Now Tad finds himself uploaded to a beta test of Haven, an unannounced hyper-immersive MMO where the dead have a second chance at life. It’s not virtual reality, it’s digital reality. A true afterlife online.

Except Haven isn’t exactly blissful paradise. Tad bumbles into a pagan blood feud, crosses paths with fallen angels, and gets lied to by saints. His only allies? A frat boy with a penchant for dying and a pixie who won’t give him the time of day.

Second chances be damned. All Tad wants is to return to his old life, and he’ll do anything for the opportunity. Even make a deal with the devil.

This is part of the SPFBO.

LITRPG is a genre of books I didn’t even really know existed until last year’s SPFBO when two ended up in my batch. I ended up reading both of them, and really enjoyed them, sending one on to be a finalist. This is another LITRPG that landed in my batch, another one that I really, really enjoyed despite the fact that I wouldn’t really know an RPG if it slapped me in the face.

This book had me hooked from the first chapter. I fell in love with the protagonist’s dark humor, his quips, and the way he died, for some reason, just thrilled me. The book took almost no time from going from one guy bemoaning life and a snowstorm, to everything that happens next. It worked for me. It was the kind of start to a book that just ticked off all the boxes. The character has a great voice, the character is interesting, the character hooks reader.

Tad, our protagonist, finds himself dead, and uploaded into a beta-version of heaven. He gets to essentially test drive this new reality. He stumbles into a pagan blood feud, and plenty of people that prove that you can’t trust what you see, and you also can’t trust what you hear. The secondary characters, a drunkard and a bully, left a little to be desired.

Essentially this book started strong, and then sort of underwhelmed me. I found the reality of the game to be a bit boring. A lot of Tad’s motivations and actions felt incredibly contrived. Some of the elements of conspiracy felt like they were inserted into the book to make it a bit more interesting, rather than realistic.

That being said, I loved the writing, and I really enjoyed Tad’s voice and his constant dark humor. The secondary characters were hit and miss for me, though they did add levity to a story that occasionally could have gotten pretty heavy.

In the end, my biggest fallback was that I just didn’t buy it. It was a good story, fun characters, a fast plot, and plenty of laughs, but it lacked something. Depth, maybe? None of the characters ever really leaped off the page. I never really got past interest. I never felt like this book gripped me.

So, this book left me feeling entertained, but wanting something more. I wanted to be thrilled, and after that first chapter, I thought maybe I would be. It was a good book, don’t get me wrong, but the writer’s potential is there. So is the vision of his world. This could have easily gone from entertaining, to captivating and I guess I just really wanted to be captivated.

Still, for fans of LITRPG, who want to read something fun, and fast moving, you won’t want to miss this book. It didn’t tick off my boxes, but it did tick off enough of them to make me pleased that I read it. It’s the start of a series, and sets a really good foundation for what comes next. I am interested enough to want to continue on with it.