An Inquiry into Love and Death – Simone St. James 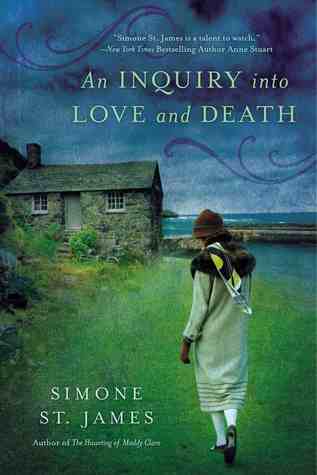 From the acclaimed author of The Haunting of Maddy Clare —and “a talent to watch” (Anne Stuart, New York Times bestselling author of Shameless)—a spellbinding ghost story set in 1920s England.

After her uncle Toby, a renowned ghost hunter, is killed in a fall off a cliff, Oxford student Jillian Leigh must rive to the seaside village of Rothewell to pack up his belongings. Almost immediately, unsettling incidents – a book left in a cold stove, a gate swinging open on its own – escalate into terrifying events that convince Jillian an angry spirit is trying to enter the house and is haunting the woods around Blood Moon Bay. If Toby discovered something sinister during his investigations, was his death no accident?

The arrival of handsome Scotland Yard inspector Drew Merriken leaves Jillian with more questions than answers – and with the added complication of a powerful mutual attraction. She suspects someone will do anything to hide the truth and begins to discover secrets that lie deep within Rothewell… and at the very heart of who she is.

One of the things I love about reviewing is how many different books I come across that I probably wouldn’t have read otherwise. Whether I love them or hate them, reviewing truly has expanded my book horizons in ways that I never dreamed of before. Another thing that is making me expand my horizons a bit is coming out of cancer treatment. Cancer treatment was very serious, and in some ways I think I’m looking for a mental vacation from all of that, so I’ve been gorging myself on books I’d typically stay very far away from, namely urban fantasy and books with romance in them. While these aren’t my typical dish, they are providing me with the mental break I really, really need right now, while giving me the thrill of discovering something new that only reviewing can provide me.

Case and point, An Inquiry into Love and Death. This is one of those books I probably wouldn’t have touched with a ten foot pole a few months ago, however, the publisher contacted me about reviewing it at the perfect time. While a few months ago I wouldn’t have read it, it seemed like the exact sort of thing I needed right now, so I jumped on it. And, the thing is, I actually ended up enjoying it a hell of a lot more than I ever expected to. That’s the other thing that’s great about reviewing – I learn that I like stuff that I never imagined I would have liked unless a publisher had sent it to me.

An Inquiry into Love and Dead is a sort of cross-genre book that will tickle the historical romance reader’s fancy while containing just the right amount of fantastic too catch the urban fantasy reader’s attention. This book takes place in the 1920’s with a protagonist who is one of the first women to attend Oxford university, which is interesting in its own right. The protagonist’s uncle passes away, and she has to travel to his house to take care of his affairs. Enter an interesting ghost story, a potentially haunted house and a hunky Scotland Yard detective and you have yourself a little historical/fantasy romance.

The plot itself isn’t really anything unique or eye catching. It’s a pretty stereotypical thing that follows all the right steps and the ending is pretty predictable. Yet despite all of that, the book itself is incredibly enjoyable. It’s a rare treat when I read a book that is both amazingly predictable and highly enjoyable at the same time. One of the reasons for this unique balance was the author’s historical details. It’s quite fascinating to read about a woman brave enough to attend university in an age when women just didn’t do that. The reactions that pepper the book when villagers learn that she’s an educated woman and traveling alone are genuine and give the book a very grounded feel. Furthermore, the ghost story itself, while kind of cheesy, is actually rife with historical details and showcase a portion of England’s rich history. It’s believable, and that’s part of what makes this book so charming. This isn’t incredibly far fetched, it’s something that the reader can actually picture happening.

Another thing that makes An Inquiry into Love and Death so charming is the author’s writing style. There’s a lot that can be said for St. James writing, not the least of which is her ability to bring an interesting, if fairly underrated period of history to life for the reader. Her prose are lyrical and flowing, with just the right amount of description. The plot might be predictable, but St. James infuses her book with enough emotion to make you truly care about the protagonist and her plight.

It should be noted that romance is heavily focused on in An Inquiry into Love and Death. While I expected this, readers who are looking for more of a good old-fashioned haunting might find themselves a little weighed down by the romantic aspects. That being said, the romance is handled well, and it has a sweet feel rather than smarmy. Though it does have a tendency to overpower the plot at certain points, it will probably hit the right notes for people looking for a nice, believable romance without all the graphic, porn-style sex that tends to fill so many urban fantasy books these days.

If I had to compare this book to others I’ve read, I’d say An Inquiry into Love and Death reminds me a bit of Among Others by Jo Walton, with a touch of Freda Warrington thrown in for good measure. The historical research and detail is incredibly well done, the romance is sweet and the writing really works to bring everything to life. St. James has an uncanny ability to balance a fairly stereotypical and rather predictable plot with some excellent writing and characters you truly care about. An Inquiry into Love and Death is a short book and a quick read, but it’s a charming one – some rather educational, believable brain candy. It’s a book that deserves far more attention than it has received so far.