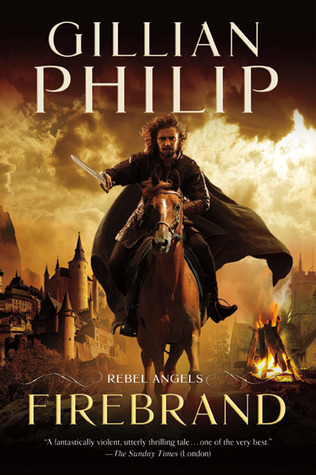 At the end of the sixteenth century, religious upheaval brings fear, superstition, and doubt to the lives of mortals. Yet unbeknownst to them, another world lies just beyond the Veil: the realm of the Sithe, a fierce and beautiful people for whom a full-mortal life is but the blink of an eye. The Veil protects and hides their world…but it is fraying at the edges, and not all think it should be repaired.

Discarded by his mother and ignored by his father, sixteen-year-old Seth MacGregor has grown up half wild in his father’s fortress, with only his idolized older brother, Conal, for family. When Conal quarrels with the Sithe queen and is forced into exile in the full-mortal world, Seth volunteers to go with him.

But life beyond the Veil is even more dangerous than they expected, and Seth and Conal soon find themselves embroiled in a witch-hunt—in which they are the quarry. Trapped between the queen’s machinations at home and the superstitious violence of the otherworld, Seth must act before both of them are fed to the witch-hunters’ fires…

Brimming with intrigue and rebellion, Firebrand is the first book in the Rebel Angels series by Gillian Philip, the Carnegie Medal–nominated author of Crossing the Line and multi-award-nominated Bad Faith.

You can purchase a copy of this book by clicking on the following links: Firebrand (Rebel Angels)

I have said it before and I’ll say it again. I have a kneejerk reaction to all things Celtic. So when I got this book in the mail, I knew I had to read it, and read it right away. Everything else got pushed to the sidelines so I could devour Firebrand. Why? Because it’s a historical fantasy with strong Celtic undertones. I’m weird. I can’t help it

Usually I equate all things faery in fantasy to romance, but that’s not really the case here. While there are some romantic notes in the book, they are quite easy to overlook and Philip keeps them from being overwhelming. Instead, Firebrand is more of a political novel than anything else. The first chunk of the book is used to set up Sithe politics and beliefs, and the second is spent following our two protagonists through their adjustment to the human world, a place also rife with some interesting politics. That being said, this book is being billed as an urban fantasy, which I feel is a misrepresentation of the book. A lot of people might pick it up looking for the dashing and quippy heroine and the dark and mysterious faery lord and plenty of sexual tension. You’ll be disappointed.

If I read a novel that has something to do with the fae, I automatically assume that it will take place in modern times and everyone in the book will be drop-dead gorgeous. Perhaps that is unfair of me, but most fae books I read are strongly urban fantasy and heavily romantic. Philip decided to take a left turn where most authors would have turned right. Instead of taking place in modern times, Philip sets the human portions of her book in the middle ages, where people were burned at the steak as witches and the best way to deal with what you were afraid of, or didn’t understand, was by killing it. It’s a period of history that I find incredibly interesting, and it’s also a period of time that requires a lot of research for realism. Thankfully, Philip did her research and Firebrand really shines due to it.

As far as protagonists go, Seth is a fun character to follow. He’s not perfect, far from it, in fact and Philip has no problems exploiting his various issues. Seth has a troubled past, and he’s rather headstrong, stubborn and lacks some forethought due to that. This tends to get him into spots of trouble, and it also keeps the plot fast moving and pumped full of energy. On the other hand, his brother Conal is a nice balance and a rather tragic story in his own right. The two brothers are like yin and yang, Seth keeps things fresh, energetic and interesting and Conal keeps things level headed and thoughtful. Both characters put together keep the book feeling rather tragic, dark and despondent. That’s one of the most amazing things about Firebrand – Philip has an uncanny ability to fill her book full of some really intense atmosphere that grips the reader and refuses to let go.

As I mentioned above, Firebrand is fairly quick moving. While most of the book does focus on politics, there are some great battle scenes and some fairly interesting twists and turns. Where some readers might be frustrated is with the distinct “set up” feel that Firebrand has. This is a definite first book in a series. Philip spends much of her time setting up her world, the magic system, the politics, beliefs and etc. While Philip puts a lot of thought into her world building, magic and politics, there are some small details that were never quite expanded upon in a way they probably deserved. For example, the demonic horses. While a cool concept, I never quite understood exactly what made them demonic, and that’s a detail that, while not being incredibly important to the book itself, would have added some unique insight into the magic system.

One of the biggest issues I noticed in Firebrand was the introduction and evolution of some of the secondary and supporting characters. Many of these characters have a tendency to only appear briefly at one point and seem rather unimportant, only to reappear later and have incredibly important roles in the plot. I’m specifically thinking about one mortal, and another Sithe individual who has an important role in the big showdown at the end of the book. While this won’t make or break the novel for many readers, it is rather frustrating. If Philip had built upon these characters as the plot evolved, it would have been easier to swallow their important roles in what happens. As it is, their introduction to certain events has a very convenient and almost unbelievable feel.

Firebrand was a book I didn’t expect to enjoy. In fact, I expected to read a light bit of fluff for a mental vacation. What I got was a formidable historical fantasy, supported by some deft world building and some great historical research. While this does have a distinct first-book-in-a-series feel to it, that’s not necessarily a bad thing. The protagonist is believable, flawed, and a sort of tortured hero that I almost immediately loved. The plot is fast moving and has a depth that surprised me considering Firebrand’s relatively short length. Despite the few flaws I outlined in this review, I find myself anxious to read the next book in this series.  Urban Fantasy fans might be disappointed by the lack of “urban” in this fantasy, but historical fantasy, or even epic fantasy fans will probably be pleasantly surprised by just how much of a punch Philip can pack.