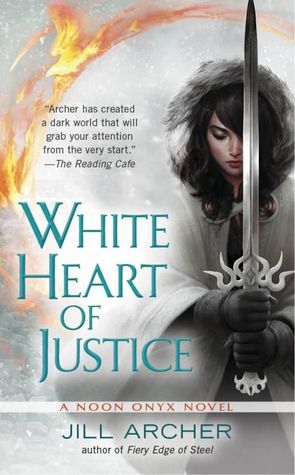 Since Lucifer claimed victory at Armageddon, demons, angels, and humans have coexisted in uneasy harmony. Those with waning magic are trained to maintain peace and order. But hostilities are never far from erupting…

After years of denying her abilities, Noon Onyx, the first woman in history to wield waning magic, has embraced her power. She’s won the right to compete in the prestigious Laurel Crown Race—an event that will not only earn her the respect of her peers but also, if she wins, the right to control her future.

However, Noon’s task is nearly impossible: retrieve the White Heart of Justice, a mythical sword that disappeared hundreds of years ago. The sword is rumored to be hidden in a dangerous region of Halja that she is unlikely to return from. But Noon’s life isn’t the only thing hanging in the balance. The sword holds an awesome power that, in the wrong hands, could reboot the apocalypse—and Noon is the only one who can prevent Armageddon from starting again

The Noon Onyx series is one of those fantasy series that I read when I need a mental vacation, but I’m not quite in the mood to turn my brain off completely. Think substantial popcorn with this one. The world is truly unique, and that’s half the draw. The apocalypse happened, and this is the world after that’s happened, and generations have passed.

There’s plenty of magic, angels and demons, both of which are shockingly and fantastically human. No angelic choirs here. Some angels are just as corrupt as you’d expect a demon to be, and some demons are more angelic than most of the angels. It’s quite a mixed bag, and it’s that mixed bag that keeps me coming back.

Now, the series itself has some issues. For example, in the first book, Noon is starting college and is in her lower twenties, but she has a locker in the hallway outside of her classes. That’s fine, but it just made the book feel much more high school than it was probably supposed to.

But this is considered “New Adult” (I assume) and I have very little experience with that, so maybe that’s normal for the New Adult sub-sub-genre-thing.

White Heart of Justice is the third book in the Noon Onyx saga. In each book she gets a little more independent. In the second book she made some important decisions regarding who she is, and in this third book she really latches onto those decisions and loses a lot of the angst that permeated parts of the plot before.

As with the previous books in the series, I know what to expect here. Noon has to prove herself, not just to herself, but to her school. She can’t be hidden anymore. The hiding is over. You get more of the badass-chick-who-kicks-ass-and-takes-names here. It was a lot of fun to see Noon really owning up to who she is, and becoming a powerful woman in her own right.

On the other hand, I lamented a bit of how that was accomplished. Noon seemed to take a step back into the stereotypical urban fantasy woman role a little bit. While she does deviate from that, I lamented the slight loss of the unique woman who fit into her unique world so perfectly.

There is a bit of a love triangle that happens in this book, another thing that can be checked off of the Elements in Urban Fantasy checklist. There is some angst that goes with that, and it muddies the romantic waters a bit. Honestly, this was probably my biggest bone of contention in the novel. It’s obvious who Noon is going to (eventually) end up with, so lets cut the drama and angst, and just focus on the plot.

The plot, itself, moves at a fast pace, and the writing sucks me in. That’s what I love about this series, and that’s something I can say about every book in it so far. No matter what the flaws are, regardless of predictability, or any elements that are less-than-believable, the writing and the plot will always pull you along. It’s just easy to sink into, and it does have that mental-vacation quality I’m looking for right now, without really turning off my cognitive function.

The world feels a little larger in White Heart of Justice, and the secondary characters that come and go keep things colorful and interesting. I enjoyed seeing how the cultures change in different locations, and learning more about the lore and setup of locations as Noon traveled around. Furthermore, Noon takes a trip and gets to see her brother, and where her mother was from. That added some nice background to her and to her family.

Mysteries are uncovered, and questions are answered. There’s enough that is hinted at regarding magic systems and the like that I makes me want to know more. I really like the fact that, three books into a series, Archer is still developing her world and the cultures and magics that are in it. It keeps things feeling fresh and new with each and every book.

White Heart of Justice is a solid installment in this series, and fans are sure to love it. While I did enjoy it quite a bit (I read it in a day), it left a little to be desired. The romantic angst felt drawn out and unnecessary. Points of the plot were very predictable, and Noon felt less unique and more UF lady-with-a-weapon-wearing-leather. There’s nothing wrong with that, but it just didn’t feel as unique as this series deserves. In fact, I felt like this book checked off a lot of bullet points on a checklist, and that did disappoint me.

That being said, this third book in the series ends in a perfect way that gives Archer a ton of wiggle room for the next development in Noon’s life. I’m looking forward to more time spent away from school and in the wide world. Noon isn’t done growing and developing, and neither is her world.

So I’ll keep coming back.