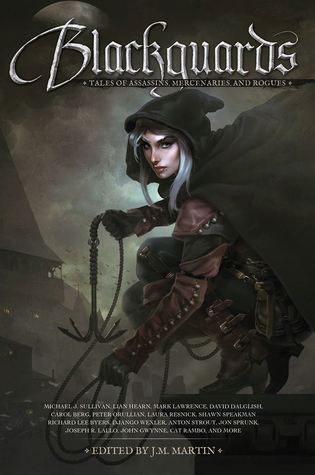 Berg holds a degree in mathematics from Rice University, and a degree in computer science from the University of Colorado. Before writing full-time, she worked as a software engineer. She lives in Colorado at the foot of the Rocky Mountains, and is the mother of three mostly grown sons. Berg’s hobby of writing fantasy novels has taken her in directions she never expected. Since her first novel Transformation was published in 2000, she has garnered international acclaim for her intelligent stories, complex characters, and lyrical prose. You can learn more about her by visiting her website.

Berg is contributing to the upcoming Blackguards anthology. Learn more about it here.

I’ve never been a brooding person, neither depressed nor sociopathic. Not even a pessimist! Thus it surprised me a bit when people started labeling my work as dark fantasy. Yes, I can be pretty tough on my heroes, heroines, and their friends. Mine are big stories, touching on world-changing events with all the accompanying dangers and hard consequences But, honestly, I never do a Hamlet on my worlds. In fact, for the most part, I leave them considerably better off than they were at the beginning of the story (even if everyone doesn’t realize it right away.) And the great events are really just a setup for tales about human beings. What makes this particular person step out to be a hero? What makes that particular person into a murderer or embezzler or the mastermind at the center of a web of nefarious deeds?

The attraction of the real

One of my goals for my stories is realism. Yes, I know that sounds pretty funny when one considers that I have gods who show up walking down the street, dragons as weapons of war, or a race who can dance the earth into health. But I’m talking about realism in the human sense. I want readers to experience my worlds through the senses – to feel the bitter cold or the sloppy mud, the arid desert or the congested city. I also want them to recognize my characters as real human beings dealing with real human conflict, even if the circumstances have to do with magical murders or the veil between the living world and the world of the dead.

As writers we all know that we should avoid cliché both in characterization – no white knights with sparkly teeth, no wilting maidens who faint at spiders and lust for muscled rescuers, no dark lords in black towers – and in plot – no elf, dwarf, human road trips where stew or elfbread are the meals of choice. Avoiding cliche when it comes to good and evil is critical as well, and makes a story take on another dimension.

Something that bothers me about our real world is our tendency to toss people, issues, and even food groups into binary bins – liberal or conservative, north or south, coke or pepsi, good or evil. It is very easy to fall into the trap of instant judgment. But as we mature, we know life is just not that simple – and it certainly isn’t for those who populate my books.

We all grow up with certain belief structures. And somewhere along the line our perceptions shift. Eventually we learn that our parents aren’t infallible. (Certainly when we turn 13!) Eventually we question the articles of faith passed down from parents, teachers, or mentors. Eventually we have to admit that a person we called friend is someone else entirely.

Certainly Valen, my hero of Flesh and Spirit and Breath and Bone and my new short story Seeds, learned to despise his parents. He called them evil and ran away, leaving behind their highly structured, restrictive world. He believed he could drift along through life, staying out of sight while having a good time and not hurting anyone. Instead, circumstances within him and outside of him drew him into addiction, thievery, selfishness, desertion – not at all heroic. Eventually he ended up lying his way into a monastery for his own selfish ends. At this point it would have been easy to portray the monks as the cold, wicked, hierarchical religious establishment or the warm, friendly brotherhood who taught Valen life lessons. In fact, he found a society of human beings, each of whom had reasons for being there and reasons for his actions, some of which were worthy and some of which were Most Definitely Not. Sorting out which was which, while getting drawn into their plots and the devastation of the wider world, caused conflict and tension – which as Lucienne pointed out in her webinar are the very things that keep readers turning pages.

Certainly Seyonne, the hero of my Rai-kirah books, came to question the religious underpinnings for the demon war his people – and he – had waged with unquestioning bravery and sacrifice for centuries. The structure of belief, custom, and dedication that he fervently believed noble and necessary looked very different after he had been away from it for sixteen years. Where was the evil? Not at all in the place he was used to finding it. And that changed everything. Real human conflict – internal and external. And tension – will the next choice be right, when right and wrong are so confused?

Sociopaths or maniacs are scary. But how much more intriguing the man who loves our heroine, who has every opportunity to choose the right and knows that turning his back on a dying man will damn him forever, but goes ahead and does it? (Purposely not mentioning any names here!) He is human. He has reasons. How much more frightening is a villain who exemplifies the highest ideals of a burgeoning civilization, or a villainess who sincerely believes that razing civilization will solve society’s problems, than someone who gets out of bed for another day of working evil? After all, maybe she’s right. How much more fun for the reader when one cannot identify these antagonists right away, because they have these very human sides to their character. And how much more devastating for your hero when he watches a person he’s come to rely on choose up with the other side as happens in The Spirit Lens.

This is the kind of tension I find much more engrossing than that of dark lords with fangs versus heroines with golden tresses. And this is the kind of human conflict we can recognize as real, even while we enjoy an adventure of the fantastic.