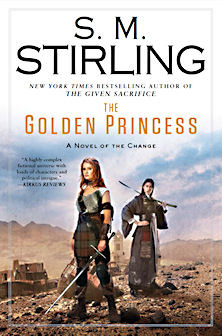 It’s Change Year 46, two generations after high-energy technology died in a catastrophe most of the human race didn’t survive.

The children born after the Change and their children are again battling against powers that are not sympathetic to humans and human concerns.

Shining New Light on the Embers: The Golden Princess, by S.M. Stirling

Before I get into the meat of this essay, there are a couple of things I want to tell you all. First, I generally write spoiler-free reviews… but in this case, there’s no way to talk about S.M. Stirling’s THE GOLDEN PRINCESS without giving away a major event from his previous novel, THE GIVEN SACRIFICE. If you don’t want to know, don’t keep reading.

Second, Stirling and I are friends. I’ve even written a story set in this universe of his, for an anthology of stories coming out next year. I’m predisposed, in other words, to look kindly upon his books; I don’t have a lot of big complaints about them.

If you haven’t dipped into the Emberverse, which starts with the end of the world we know, passes through the tropes of disaster-novels and then moves into a strangely sunny post-apocalyptic scenario, here’s a very abbreviated précis of the story so far:

The Change itself is a specific event. In 1998, most of humanity’s advanced technology, including guns and anything that required electricity, stopped working. Not surprisingly, billions died in the resulting collapse of civilization. Among the survivors, there were some unlucky folk who fell into cannibalism and savagery. Better off and better organized people who had throwback skills (like bowhunting, weaving and brewing) banded together to form alliances, eventually patching together a civilization reminiscent of the European kingdoms of the medieval period.

Some of those who thrived were hard-core Tolkien fans, who built a subculture around becoming true Dúnedain Rangers, right down to learning Elvish. Others were practicing Wiccans with well-placed farmland in the Willamette Valley; still others were members of the Society for Creative Anachronism, people who came into the crisis with all the advantages conveyed by their social structure and chain of command, not to mention some of those crucial old-world skills. There is even an organized pack of descendants from a crashed plane full of Boy and Girl Scouts.

Over time, it became apparent the Change was part of a larger battle between bigtime supernatural forces of good and evil, that these forces were having a knock-down, drag-out fight for dominion over humanity. One of the agents for good was Rudi MacKenzie, who took some of his vassals on quest for a magical sword. The sword helped him put together a powerful military alliance, and was instrumental in helping him defeat the forces of evil as represented by CUT, the Church Universal and Triumphant. After a lot of bloodshed, Rudi–or Artos the First, as he became known–drove the Cut’s followers out of Montival, a territory including Northern California, much of the Pacific Northwest, Yellowstone Park and a scrape of Southern Alberta.

(If this seems like a lot of backstory, do remember that I’m summarizing a good ten novels here.)

Now Artos is dead–this’d be the spoiler I mentioned–killed in a seemingly minor skirmish between newly aggressive pirates from Haida Gwai, Korean nationals, and a delegation from the nation of Japan. Montival may be safe for the moment, but the King’s survivors are realizing they haven’t, by any stretch, wiped the CUT’s forces out.

THE GOLDEN PRINCESS begins where THE GIVEN SACRIFICE left off, with the death of Artos and the slow dissemination of the sad news to his far-flung kingdom. His daughter, the princess Orlaith, was with him in the battle that claimed his life. Now she has his magical sword and command of the travelling party that had accompanied him to California. By law, she’s not automatically Queen–her mother Matilda will rule Montival for several years, until Orlaith is of age. But there’s still plenty for her to do. She must return home while getting to know the delegation from Japan–who also lost an Emperor and who are also now led by a young woman–so they can together determine how to cope with the new enemies threatening them.

I have been pondering the Emberverse lately, considering what it is that makes these books work and what, as a reader, I want from them. They are an odd cousin to ‘typical’ alternate history–if such a thing can be said to exist. Stirling’s books have a structural similarity to many of Harry Turtledove’s best sagas, and even, I’d say, the writing of James Michener. They’ve got big casts of characters, in other words, and use a shifting point of view to cover an enormous patchwork of stories, checking in with the major players in various geographic locales to build up a larger political areas as they’re swept up by the action of the story.

In THE GOLDEN PRINCESS, we follow Orlaith through her father’s funeral, check in with the new Japanese Empress, and then skip off to Australia, where King John is pondering whether a limited franchise for his working farmers could serve as a decent political counter-weight against the self-interested nobles of his kingdom. We meet a young Dúnedain Ranger named Faramir Kovalevsky, as he considers the emerging tactical problem of Montival’s essentially unwatchable seacosts and tracks a war party that may very well include his king’s assassin.

Stirling’s universe is meticulously built. He started with the initial disaster of the Change but has been moving steadily outward from that event. It’s several generations later now. People who remember our high-tech world are slowly dying out, due to old age and other forms of attrition. Their grandchildren are taking over, and the societies they developed at the height of the tragedy are putting down roots, getting comfortable, and expanding.

I was purely thrilled to meet the Australians, to simply see beyond the confines of Western North America.

The earlier Change Novels were also, in their way, distant cousins of apocalyptic dramas like The Walking Dead. TWD is very much concerned with the nuts and bolts of how one simply stays alive within a ruined and hostile landscape. It invites you to imagine how you’d get by, to cast yourself as one of the statistically unlikely people who make it, confront the hard choices and see what you might bring to the table as the world gets remade. There’s an intimacy in that idea, that chance to imagine who you might be without all the support offered by the modern world and its conveniences. It’s the allure of imagining being stripped to the core.

These later books, though, are less about personal survival and more about questions of nation-building, alliances and cooperation. They have moved on into some of the larger questions of community faced by our own society. In the process, they also show that life goes on: that most of the time people and societies can recover, to some extent, to a massive blow.

If I can be said to have any beef with these books, it’s that they carry with them an immense amount of context: when we meet Faramir, for example, it’s in a scene where the author brings us up to date on who he is within Dúnedain society. This makes good sense: long-time fans of the series want to know how he’s related to the characters we’ve seen before. But everything he’s doing is so interesting that part of me simply longs to just get to the action. Stirling never fails to pay off on everything he sets up, and his explanations are always interesting… but even so, the set-up sometimes feels lengthy, even patience-testing.

It is unutterably cool, though, to see the conflict in THE GOLDEN PRINCESS go global. The move is a logical extension of everything that has gone before: the kingdom of Montival could never have been the only organized group of survivors, and enough time has passed since the initial Change event that it only makes sense that these resurrected and reimagined civilizations are beginning to expand outward, to build ships and engage in more serious trade and warfare. The chance to see how the situation unfolded around the world is delicious. And knowing that Orlaith–who has been one of my favourite up and coming characters in this universe–will be fighting her own version of the war with the CUT, with international allies, is delightful too.

But rather than tell you how it all plays out–since I am spoiler-averse–I’ll just send you off to get the book, shall I? This is a unique series, an unusually complex world, and one well worth exploring. Whether you’re visiting for the first time or checking in with the offspring of familiar characters, the ones who initially weathered the Change, I hope you enjoy the trip as much as I did.

Huge thanks to Alyx Dellamonica for writing this review. Her books are incredible, so check out her website to learn more about her, including the various places you can buy her books and follow her online.