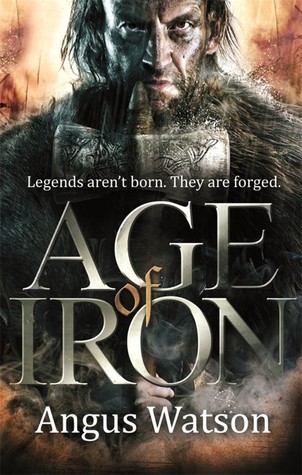 Now Dug’s on the wrong side of that thousands-strong army he hoped to join ­- and worse, Zadar has bloodthirsty druid magic on his side. All Dug has is his war hammer, one rescued child and one unpredictable, highly-trained warrior with a lust for revenge that’s going to get them all killed . .

FIRST IN A NEW SERIES!

This book was bought as a Kindle edition from Amazon.

I was fairly excited to pick up Angus Watson’s Age of Iron. I like stories that take place in the gray area between historical fiction and fantasy, that promise the excitement of combat and adventure, while still presenting an authentic portrayal of a real time and place. I got that from Age of Iron, along with a good deal of frustration.

Age of Iron is structured like a thriller. The three, primary characters spend the majority of the novel on the lam, being pursued by the warriors of Zadar, an evil king who is terrorizing Britain in the time before the Roman invasion. The novel mostly follows Dug, a warrior, Lowa, a fighter and archer, and Spring, a wise, strange little girl, but Watson takes detours along the way to show us minor characters, as well (mostly villains). A fourth character – Ragnall, a druid – is also followed, and his journey intersects with the others for the last part of the book.

The writing is straightforward, with the occasional, iron-age expletive (“badgers’ cocks!”) thrown in for good measure. The time Watson is writing about is a bloody one, where violence and death are commonplace. Though I didn’t object, the grisly fates met by various townsfolk and a few minor characters might turn off readers with a low tolerance for gore (and a soupcon of torture, here and there).

Overall, the writing style fit the tense, fast-paced narrative, but at times the simplicity of the prose seemed to bleed into the characters. Though Dug, Lowa, Spring and Ragnall have back stories, they rarely felt (or expressed) complex emotions: descriptions of Dug’s jealousy at times seemed more what I would have expected from a young man, as opposed to a widower who had seen many battles, and the villains’ simple fantasies of power and adulation sometimes took me out of the story. I found myself longing for complex motivations, internal conflicts, and character evolution – not so much that it would take away from the action, but enough that it would make the characters seem more like real people.

I enjoyed the egalitarian nature of iron age Britain, a place with both male and female warriors. The coming Romans are like a sword, hanging over the island, something that Watson explores. The coming of the Romans, especially what it will mean for the women of Britain, is hotly debated among the townsfolk, and influences the decisions made by their leaders; I hope that Watson delves more deeply into this in the sequels. As Dug, Lowa, and Spring flee Zadar’s forces, the book takes us from small settlements, to a school for druids, to a mighty fortress – enough to whet the appetite, but leave you wanting more of both iron age Britain, and the Rome that menaces her.

Though Age of Iron is very engaging, there were times when the storytelling falls short. Ragnall – a young, good looking Druid who spends much of the narrative travelling the countryside – is boring and has little to do, and a romantic subplot involving him falls flat. Though Watson overall does a good job of revealing iron age Britain through the story, there are passages of unnecessary exposition, often taking the form of an older character spending several paragraphs explaining something to a younger one. Some plot points, also, seemed contrived: villains who should have been killed escape so that they can continue menacing the protagonists, and at one point a character riding on a horse through the woods happens to pass by at just the right time to hear a man calling faintly from a clearing a little ways away. In general, characters just seem to be in the right place at the right time.

Probably the thing that frustrated me the most about Age of Iron was Watson’s portrayal of magic. The novel begins with a note, explaining that in 55 BC the Romans invaded Britain, and that history records what Caesar wrote in his diary: that the Romans won every battle, but never intended to stay. The note ends by saying “the following is what really happened.” This sets the book firmly in the real, historical world, and for most of the narrative, I believed that there would be no magic. This starts to shift about midway through, however – by the end in a big way – and I felt blindsided. Was I reading about a parallel, magical Britain, or about the real Britain, as written by an author who believes in magic? My primary struggle was with the expectations that Watson himself set: if magic was going to be a part of the story, it should have been hinted at, earlier. As it stands, the magic at the end – though it kicks things up a notch and is fun to read – has a deux ex machina feel to it.

It’s hard for me to say whether I liked Age of Iron, or not. Though I had a lot of issues with it – not just intellectually, but as I read it – I also had a good time with the story. Watson does a fine job of driving the narrative forward, and the book is hard to put down. I literally complained my way through Age of Iron (to my wife), while at the same time reading it quickly over several days. On one hand, I’d recommend Age of Iron to anyone who enjoys fantasy thrillers, and who feels that they would get caught up in the action and be able to overlook its flaws. On the other, I probably won’t pick up the sequel.

Huge thanks to Steven Long for writing this review!