I need to make a confession. I know absolutely nothing about Star Wars. I am not even exaggerating. Before I saw Episode VII, I knew exactly three things about Star Wars:

My ignorance regarding Star Wars is so fantastically complete, and so absolutely rare in the genre community that I’m pretty sure it could be its own museum exhibit. I saw Episode VII with my husband, and I went into it thinking that seeing it would be my favor to my husband, and a nice way to get away from my kids for a little while (I love my kids, but let’s be honest here, sometimes mama needs to be with another adult for a while.).

So I went online, and I asked a whole lot of people a whole lot of stupid questions because, damn folks, there is a ton of Star Wars stuff out there, and figuring out where to start with it all is about 900% more confusing than figuring out the Discworld series, and that had me pretty baffled for a little bit. I decided that the best place for me to start is Episode I, mostly because it’s generally a good idea to start series/movies/anything where it says “Number 1.” (Feel free to argue with me about this. I’ve already done it so it’s too late! Mwahahahaha). I also decided that I’d read the books first, and watch the movies after.

After I did this, I went online and said that I did this, and I had an amount of people that honestly amazed me interested in my thoughts. Most of the reasons were because I’m reading the books first and watching the movies after, which is different than normal, I guess, and therefore people are curious about my experience with it all. Also, a lot of people seemed interested in my experience due to my phenomenal ignorance and lack of any predisposition regarding anything Star Wars. Apparently I’m a rare breed of nerd.

I decided to blog about this.
(When I told my husband my decision, he rolled his eyes and said, “Brace yourself for the hate mail, Sarah.”)

So here you go. Please don’t hate me. 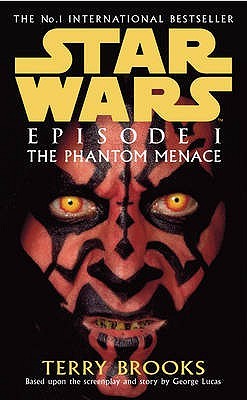 I’m not really a big fan of Terry Brooks. I never have been. And really, I don’t need to be. Not every author has to work with every reader. I highly respect the guy, and I think he tells some compelling stories, but stylistically, he typically doesn’t work with me. I went into The Phantom Menace with the attitude that I’d have to just keep my head down and plow through it. And that’s what I did.

Terry Brooks writing of The Phantom Menace definitely wasn’t his strongest work. In general, I felt like he had a hard time translating the movie to the book, and really managing to connect with his readers. There was a lot more telling rather than showing. Occasionally Anakin’s point of view felt kind of dumbed down and while I understand that he’s a nine-year-old boy, it was rather jarring. Sometimes I felt like Brooks was just dictating what happened, which was unfortunate, because there was a lot of fodder there that he could have expanded upon, leaving a lot of missed opportunities.

That being said, the story was often gripping enough to keep me interested despite the issues I had with Brooks writing. By and large, the book followed the movie pretty closely, but once I finished the book and sat down to watch the movie I realized that there were enough extra scenes that Brooks threw into the novel that actually added a lot of context to the movie, and a lot of depth that I hadn’t really expected. Seeing things from Anakin’s point of view in the novel helped me understand a lot of the thoughts and layers involved in many of the situations he faced.

One thing that really surprised me was that after reading the book and a few of Jar Jar’s perspectives, he really wasn’t as annoying to me in the movie as he came across to many people. Once I experienced situations from his point of view, and got into his mind, it was easier for me to overlook his awkwardness in the film to see the good, struggling guy with a heart of gold under all the quirky clumsiness. I kind of regretted that in the film he came across as a campy secondary character, where in the novel he felt more important and thought out. 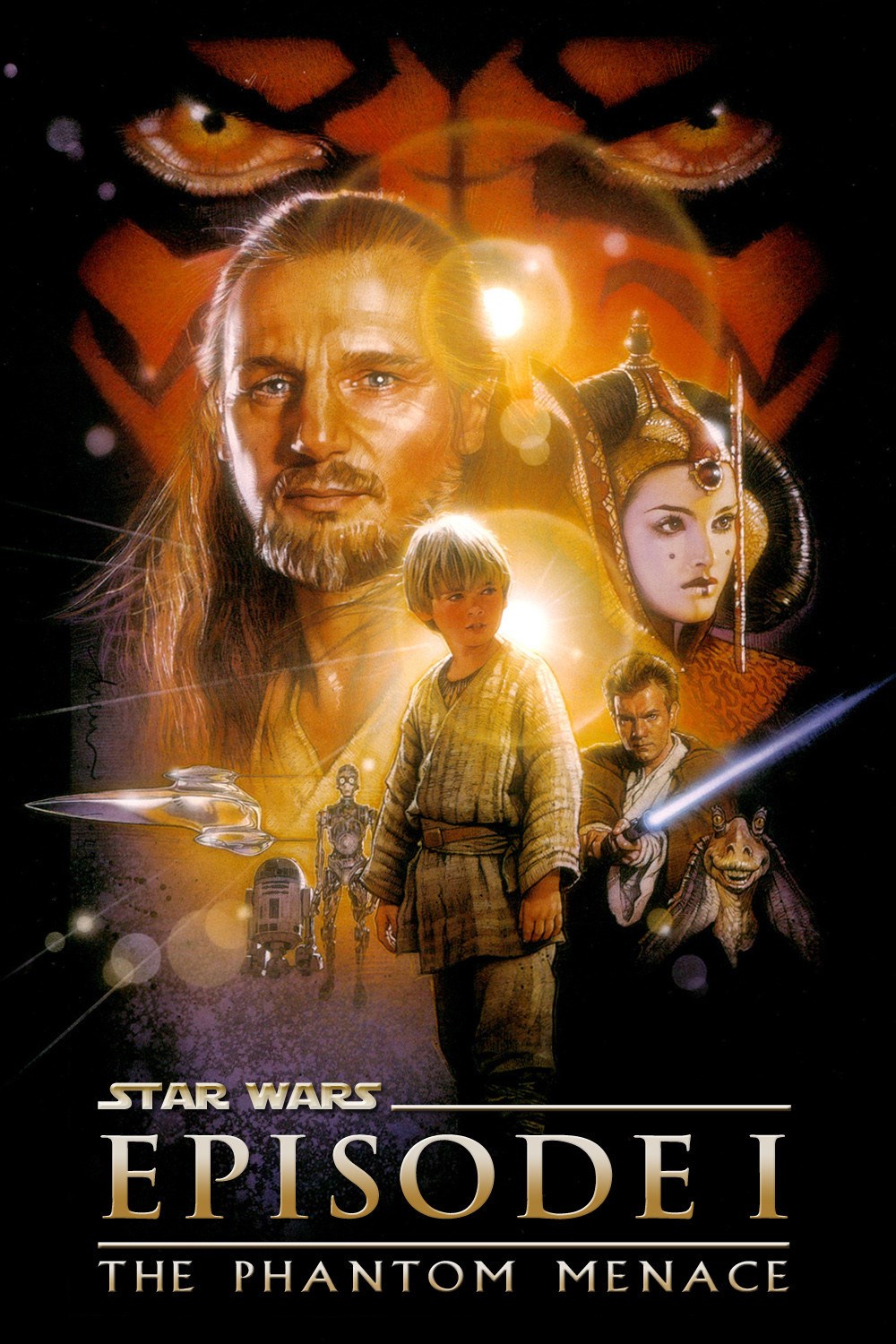 There are other differences between the book and the movie. For example, the book starts with Anakin in a pod race, he wrecks the pod, and has to deal with Watto, which kind of expands upon the relationship between Watto and Anakin’s family in a way that the film never really got to. In one scene, Anakin has to travel into the desert to buy some droids for Watto and ends up helping a guy he finds out there, which gives some background into cultural clashes on Tatooine. Jar Jar, as I’ve mentioned, has a few points where the story is told from his perspective, and getting into his head really served to warm me up to his character where I think if I just saw him in the movie he probably would have seriously annoyed me. The standoff with Naboo is explained a bit more, which helped me understand more of the social and governmental issues that were being faced at that time.

There is also quite a bit of background given as to the Dark Side and the Jedi, their heritage, wars and whatever else that has helped shape things into what it is in this book. The Force is really interesting, but it is obviously complex and this background in the book helped me probably more than just about anything else. The movie doesn’t really give much background or history regarding the Force, and the book, while it doesn’t give much, gives enough to help me appreciate a lot of the nuances in the film that would have gone right over my head. It also helped me appreciate the role of the Jedi in the universe, government, and social situations in general.

And, to be honest with you, all those differences (and more that I haven’t listed) really helped me appreciate the film more than I would have before. Episode I is my husband’s least favorite film, a sentiment that I’ve heard many Star Wars fans share, and while it wasn’t my favorite thing I’ve ever watched (or read), it was interesting to see where all the depth and details in the novel played out (or didn’t) in the movie. I also appreciated what was in the movie more than I probably would have otherwise, and saw a wider story going on than was really shown in the film.

That being said, I do feel like Episode I, while important, had a whole lot of pork in it, scenes that were drawn on a little too long, some parts that didn’t necessarily need to be there (I’m sorry, but Darth Maul could have been super freaking cool and ended up being super freaking wasted in this book and movie, IMO. But I really want his light saber. Bad.)

The Phantom Menace sets the scene for quite a dynamic story. While I’ve figured out where Anakin ends up, the story of how he gets there is something that has me quite interested. It’s neat to see what could have been, and watch the story unfold of all the small things that went into creating what actually was. The book was a lot more dynamic than the movie, with a lot more depth despite some awkward pacing and writing issues in it. I’m glad I read the book first, because if I’m completely honest with you, if I’d seen the movie first I doubt I would have had much interest in reading the book, or really continuing on with the prequel trilogy.

Summarization: The book was more effective than the movie, but they both worked together to highlight this complex story very well. Most people seem to dislike episode I, or at least feel indifferent to it. While I don’t think I’m going to put it on my list of favorite movies or books, I certainly didn’t dislike it. I absolutely attribute that to the fact that I read the book before I watched the movie.

The Phantom Menace sets the scene for a family saga that spans a universe that is both gripping and strange, and incredibly focused on emotions, and their power, which fascinates me. This wasn’t my favorite story in the world, but it sets a good stage that is ripe others to build on. I’ve already started Episode II, and if anyone cares, I will continue doing posts like these as I work my way through the Star Wars canon.

(Another note: Everyone has opinions on how to watch/read these books. Everyone. And everyone’s opinions are different, which is why I’ve basically said screw it and started with Episode I. I realize you’ll probably think I’m doing this wrong. That’s okay. I’m having fun anyway.)