The Expanse | A Rambling Diatribe about the Books & TV Show 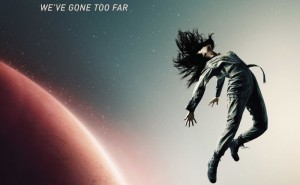 I’ve been asked about 400 times (okay, maybe that’s an exaggeration) about my opinions regarding The Expanse so far. I just finished the third book in the series, Abaddon’s Gate, last night, so I figured I’d pop over here and write a little bit about my insights regarding the TV show and the series.

It’s interesting how two people can approach something so differently. For example, The Expanse series on SyFy is something I’ve been very excited about. My husband, less so. He was curious, but I don’t think he’d have watched it if I hadn’t bullied him into it (ha ha). However, now that he’s watched four episodes, he’s pretty into it. I’m really into it. But I’ve read Leviathan Wakes about three times, and I just finished the third book in the series last night. I’m really excited to see how something I’ve read plays out on TV.

The show is unfolding beautifully for me. My husband is struggling with it a little. I think he’s having a hard time following the numerous storylines and puzzling out who is doing what and why. He find the complex social issues that Miller is wading through a little over his head, and while Holden’s situation is the one he’s having the easiest time following (and I think he thinks it’s more interesting), I had to explain to him a lot of what Holden was dealing with, and why it mattered, through the first two episodes. I think Miller’s storyline is a little boring to my husband so far. He’s looking for a girl, but it isn’t obvious who she is or why she’s important, so why should he care? It will become clear, very clear, very soon, but through the first four episodes, I think it would be pretty easy for a newcomer to the show/book to feel that way.

The series as a whole has been a bit like that, to me, too. Leviathan Wakes was a hugely fun book, but it took about a hundred pages for me to really start caring, and to figure out where things were going. The whole book is its own complex organism, but in the face of the entire series, Leviathan Wakes really is a book that sets the stage for more to come. Parts of it are complex, parts are confusing, parts are paced weird. The whole thing is nonstop action that keeps things moving forward at a relentless pace, peppered with characters that you love or hate, but they are all certainly individual in their own right, and obviously moving toward their own goals.

That seems to be where the show is at, too. It’s following the book very well, but in that it has its moments, just like the book did. Some things that were clear in the book are harder to understand on the television due to time constraints and various other limitations of that nature. I can see how my husband would think the thing is a little confusing. I think I spent more of the first episode explaining what was going on to my husband than actually watching it. It’s easy to understand the political issues and problems Belters face when an ice hauler bites it, especially when it’s addressed frequently in a book of that length. It’s harder to understand when it’s given on and off time in an hour episode. And the difficulty with understanding Belter patois doesn’t really help.

To be fair, my husband had the same issues with the Game of Thrones TV show, and now he’s a huge fan of it. There’s a difficulty that people face when they take something complex and intricate, and try to shove it in a one-hour time slot. I think that’s pretty natural. It took him about four episodes to warm up to Game of Thrones, and that’s about what it’s taken for him to warm up to The Expanse. He’s been asking me relentlessly for a week when the next episode will be up, so that says something.

My personal opinion on the show is that it’s following the book beautifully. I thought the first episode felt pretty rushed and too much was packed into it. It took until roughly the fourth episode for things really to kick in and start getting as exciting as they were in the book. I think SyFy has done amazing things with the setting, and that really helps bring this far-flung space opera sort of story to life. I’m pretty sure that the viewers who are struggling with the show might need to stick it out until the fourth episode, maybe the fifth, to really get things to click in place.

Usually a book loses some things when it gets put into TV format, but so far the writers of The Expanse seem to have done a fantastic job of trimming the things that easily could have been trimmed in the book, and highlighting the things that maybe needed a bit of highlighting in the book. I’m actually quite surprised by how well they’ve managed to make a book-to-TV transition, and I think generally they’ve grown on the book’s strengths, and lessened the book’s weaknesses.

The Expanse has been signed on for a second season, which is pretty exciting. When I look at the series as a whole, Caliban’s War is where things really move beyond the buildup phase and into something interesting. That’s the book where everything is elevated. The writing is better, the plot is tighter, the action is more streamlined, and the intrigue seems to have more of a purpose than it did before. There’s a point to it all finally, and readers might not understand it yet, but it’s obviously the writer duo is moving toward something specific.

That being said, Caliban’s War, in a lot of ways, did feel like it was just more of Leviathan’s Wake. Better than Leviathan’s Wake, but more of it in many respects. I’m very interested to see how that plays out on the television. I think it could be grand if the show continues the way it’s been going. There is so much different, that the underlying issues that made it feel more of the same in many ways could easily be overlooked in a TV medium. Things are given so much more depth, and a more pointed direction. The stakes are higher, and it’s interesting to see the characters stressed and strained and adjusting to life after the tragedies of Leviathan’s Wake, while they watch their universe expand in mysterious, rather terrifying ways.

I said on my Facebook recently that book three, Abaddon’s Gate, seems to be where “shit gets real” in the series. Everything that’s been built on for two novels gets… blown up, I guess. Things turn left, and everything is left open and gaping and I just want to know what happens next (luckily, I have book four looking at me right now). Abaddon’s Gate would be, in my opinion, harder to translate onto TV, but probably the most rewarding viewing experience of the three books so far. I sincerely hope they get the show that far, because I want to see it. Bad.

People say that this series is a guilty pleasure for them, but I’m pleased to say it’s an immense pleasure that I don’t feel the least bit guilty about. I think the book is translating into a fantastic TV show, and I’m thrilled that it’s been so successful. I’m excited that it’s been signed on for a second season. Now, if you’ll forgive me, I’m going to end my diatribe so I can start on the fourth book in the series.