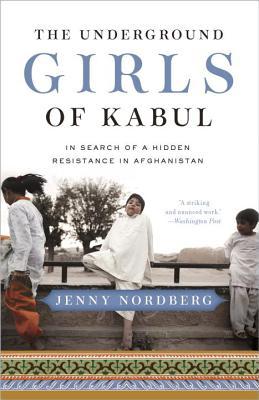 In Afghanistan, a culture ruled almost entirely by men, the birth of a son is cause for celebration and the arrival of a daughter is often mourned as misfortune. A bacha posh (literally translated from Dari as “dressed up like a boy”) is a third kind of child – a girl temporarily raised as a boy and presented as such to the outside world. Jenny Nordberg, the reporter who broke the story of this phenomenon for the New York Times, constructs a powerful and moving account of those secretly living on the other side of a deeply segregated society where women have almost no rights and little freedom.

The Underground Girls of Kabul is anchored by vivid characters who bring this remarkable story to life: Azita, a female parliamentarian who sees no other choice but to turn her fourth daughter Mehran into a boy; Zahra, the tomboy teenager who struggles with puberty and refuses her parents’ attempts to turn her back into a girl; Shukria, now a married mother of three after living for twenty years as a man; and Nader, who prays with Shahed, the undercover female police officer, as they both remain in male disguise as adults.

At the heart of this emotional narrative is a new perspective on the extreme sacrifices of Afghan women and girls against the violent backdrop of America’s longest war. Divided into four parts, the book follows those born as the unwanted sex in Afghanistan, but who live as the socially favored gender through childhood and puberty, only to later be forced into marriage and childbirth. The Underground Girls of Kabul charts their dramatic life cycles, while examining our own history and the parallels to subversive actions of people who live under oppression everywhere.

I said a while back that I read nonfiction as well as speculative fiction, and occasionally I’d read a nonfiction book and I’d review it on my website because I can. The Underground Girls of Kabul is one of those nonfiction books that I think should be read by just about anyone who reads books. Yes, it was that good.

My library has a few online sources for people, such as myself, to check out audiobooks. I sift through them, and randomly check out an audiobook for no real reason other than I like the title or the cover looks interesting or something like that. The Underground Girls of Kabul was one of those books that I just ran across and randomly decided to give it a shot.

The Underground Girls of Kabul was written by a Swedish investigative journalist, and before you ask, the audiobook was out of this world amazing. This is a really hard book for me to summarize, because there’s just so much involved in it. I fundamentally think that we don’t understand enough about the Middle East, and this book proves it, probably not in the way you expect.

Afghanistan is one of those mysterious countries that we know of, we know where it’s at, we know a war happened there, but as for the culture, the struggle of the women, the plight of the kids, the local food and cuisine, we really don’t know anything about that. We don’t understand the minutiae of daily life for an Afghani woman or child. When you think about how much of a society – any society – is women, you’ll realize how much we just don’t understand, and even reading a book like this, a million books like this, won’t change that, it will help.

So this book. Wow, this book. God, I don’t even know where to start. I really, really don’t. Basically Nordberg uses all of her investigative skills to basically dive deep into this sort of underground counterculture that is actually quite common, incredibly common, in fact, for many young girls in Afghanistan. And her writing is absolutely superb. She follows a prominent female politician, one of the only, who graciously opens up her life and thereby opens up a doorway for Nordberg to really uncover and explore a bit of these underground girls.

If you’re interested in gender issues, politics, current events, or any meshup of all of those, you’ll want to check this one out. Basically Nordberg uncovers what is known as bacha posh, or girls that are raised as boys in Afghanistan. She discusses the history (and there is quite an extensive history of this), and how it’s evolved in current day practices, and uses the politician, and her young bacha posh as a doorway to look into the lives of many other young bacha posh and their lives.

There are a ton of reasons why people raise bacha posh in Afghanistan. There is a belief that raising a bacha posh will help the woman conceive sons, a sort of magic all its own. Some raise a bacha posh as protection for their actual son – a body guard of sorts. The bacha posh must protect the “real” boy. Some do it because they only have daughters and having a son will raise their social status. Some do it because they believe their daughter should understand what it is like to really live, at least for a time. There are a ton of other reasons. The point is, this is a common, underground practice, so common that the Afghani people actually have a word for it, and a way to speak about it.

So that’s fascinating, but where things really get interesting is when Nordberg gets into the nitty-gritty of the psychological impacts of this practice. Usually when a young girl hits puberty (marriageable age) they are suddenly transformed back into a girl, with the incredibly diminished status of a girl (It has been said that Afghanistan is one of the worst places in the world to be born a woman, and this book really explores a lot of what makes that sadly true). She finds quite a few bacha posh who have refused that transformation, one of whom is interested in sneaking into Iran or other countries to get an official sex change, another who works in the military. This really upsets their gender identity, and leaves generations of young girls who were raised as bacha posh, with some hefty psychological issues and no net in their society to catch them. It’s tragic, but it also illuminates this really silent, subtle, largely overlooked revolution in that country. The women have found a way to survive, and while it is FAR from a perfect system, it really has the smell of a social revolution.

I’m inadequately talking about this book. There is so much in it, so very, very much that I honestly can’t really even put it into words. It covers just about everything, and uncovers a whole aspect of Afghani culture, and this silent struggle for women’s rights, that we out here in the west are absolutely blind to.

So, The Underground Girls of Kabul was one of the best books I read last year. The only reason it didn’t make it on my best books list was because it’s a nonfiction, and I was only talking about speculative fiction. However, I felt the need to mention it here, because really, it needs to be read.